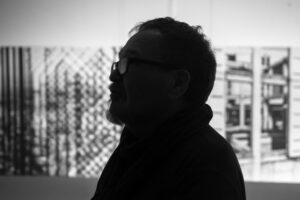 Gamal Bokonbaev,  an art critiс, CONTINUES TO REVIEW the collection of the State Museum of Fine Arts named after Gapar Aitiev and the work of the famous artist and cult Kyrgyz actor Suimenkul Chokmorov.

The author of the review is an architect, designer and artist by education. His bibliography includes 12 printed books, in addition, he has organized several dozen art exhibitions in the country. 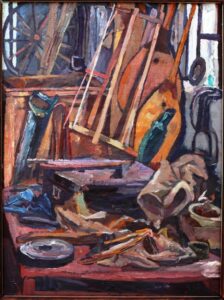 The interior of the craft workshop goes into perspective, towards the far window of the room. The view seems like deliberately cluttered with chaos, in which only the owner sees order. The artist sees the order of forms. The frames of the bow saw echo the frames of the windows. The wheel argues with rectangles. They help him: the ovals of the deck, a grindstone, a circular saw on the windowsill. They are responsible for the geometry of the composition. A wooden sideboard, stirrups, saws, form the necessary noise. However, below on the table something formless is going on and rags rule here. They look lonely: an ax and an adze, something similar to a rasp, a horseshoe and mittens. The most mysterious is incomprehensibly green. Suitcase hides small items. Wood creates a warm atmosphere, while walls and windows add blue coolness.

You can see here the finds of cubism and the “Jack of Diamonds”. However, they are interpreted in the Soviet way: sharp corners are smoothed out, there are no abstract lines of development; the form does not prevail and experiments have long become the School of Craft. The artist is observant – there are national features! Time Features! Stirrups are a Kyrgyz symbol! The Kyrgyz are indifferent to horseshoes. To stand in the stirrups is to become a man! Dombra is a Kazakh national musical instrument. Where is it from? Why? This is because then we lived in a big united country. A special content requires a special form and a special painting appears. 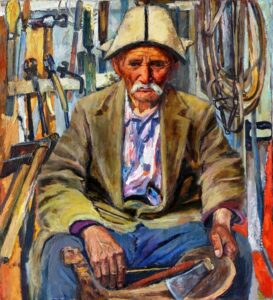 Chokmor was a master of all trades; he made both horse utensils and musical instruments. The eldest son Sultan – the heir to his father’s business – lived until 1995, up to eighty-seven years old. There is a photograph where Suimenkul paints this particular work from life, and his elder brother, Sultan Chokmorov, poses for him.

In the 80s in the artist’s work there was a return to a realistic manner of painting, to traditional “craft” methods of work. Old Usta (Master – Kyrgyz lang) in his workshop, holding a saddle blank in front of him. The face, gray mustache, eyes, and especially the hands are spelled out in detail. Dressed in casual work clothes. Axes, adzes, hacksaws, tongs, hammers, files, horse harness are hung on the wall behind. All kinds of tools, folds of clothes, deep wrinkles, swollen veins – all these are bizarre patterns of antiquity, folk crafts, unpretentious peasant life. Even kalpak*, with his simple appearance, seems to “declares”: everything is simple here, we work. 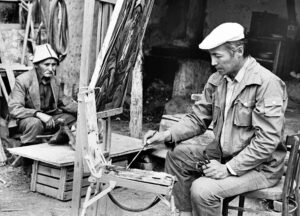 Previously, many such people outwardly did not stand out in any way, and the Soviet power rested on them until its very end. It was they, who in their daily work, smoothed out all the imperfections and miscalculations of the Party. They did not produced just things, but highly artistic things. This helped people to live according to the laws of beauty. National Masters! People’s Artists! 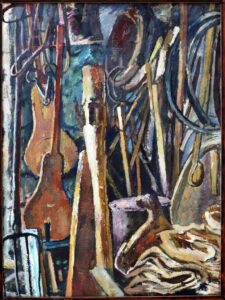 Dominant verticals. They play, vibrate, slightly noticeably lean in different directions, in a suprematist, sophisticated way, they do not let the gaze stop. A little bit of ovals and circles. Right in the middle is something incomprehensible triangular shape. Is this a fixture? Blank? Unclear! Clearly visible: a pitchfork, two komuz* (they correctly balance the Kazakh dombras** on the left side of the triptych); saddle blank, harness and tank. And chaos reigns in the center of the composition, these are no longer things – these are elements of the composition. For an artist, this is a passing nature. He doesn’t go deeper anymore. This is a common disease of the Kyrgyz School of Painting of the late Soviet period: the artists were forced to follow the logic of safe formal experiments, not delving into dangerous meanings. Kyrgyz art still suffers from this disease of semi-aestheticism. And in the still life we ​​still recognize objects, but distantly, alienated. And we do not embrace the joy of understanding. We will never feel their smell, we will not scratch ourselves on their texture, we will not embrace bodies-volumes, we will not smear ourselves with dust-sawdust from head to toe. Craft is an outgoing nature. But the desire to make something with your own hands will remain with us forever! 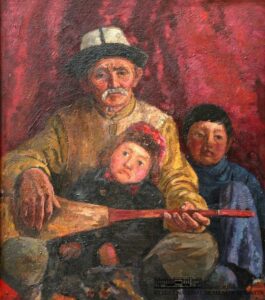 It’s getting dark. Against the background of a plain burgundy backdrop, tush kiyza, an old master sits, nursing his younger grandson and at the same time playing a melody on the komuz. The older grandson sits next to me. Everyone thinks about his own: the baby’s eyes are opened in surprise to the world of colorful visions; the older one already knows how to dream; the aksakal has sadness in his eyes.

It is easy to see that this work literally repeats work “Elder brother Sultan with his son.” Repeat: plot, composition, color. One more character was added, a philosophical generalization appeared. Furtichev Vilitariy Ivanovich in the book “Suymenkul Chokmorov: Twelve Studies of Life and Work” writes that in 1971 the artist began working on the painting “Elder Brother Sultan with his son” and worked on it for almost ten years. He wanted to convey a certain impression. “… Sometime in his childhood, Suimenkul was struck by the pinkish glow of the space of the room, the source of which was tush-kiyiz*, a kind of wall carpet sewn from pieces of velvet and plush…”. Glow, like an image from childhood. A mysterious glow that pushes the darkness and fascinates with its magic, makes you return and look again for the source of folk traditions, strength and wisdom, happiness and prosperity. By solving a purely coloristic problem, the artist managed to reveal a wonderful idea: the most precious thing for the Kyrgyz is children, their future. Old Usta (Master – Kyrg. language) must give them a melody! Craft! Spirit! Memory! … But why did Old Mouth think, and there was sadness in his eyes? Did you remember a lot of sad, dark things? 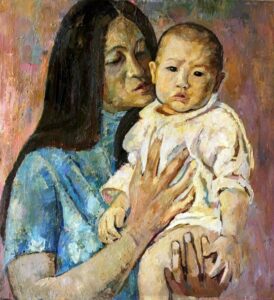 The artist’s wife, Salima Shabazova, with her one-year-old son Baktygul, named after his father’s debut role, in the film “Shot at the Karash Pass”. The kid looks at the viewer in surprise, warily studies the world around him, new to him. All the mother’s thoughts are about the child: she securely holds him in disproportionately huge hands, caresses him with outstretched lips, and cherishes him with a loving look. The basis of the color is shades of ocher and three more pale shades: a white shirt, a blue dress, a pink background. The boundaries of pale tones outline whimsical black contours, in some places they disappear, receding before the defenselessness of the form, allowing it to merge gently with the background. The dark hair of the mother and the sparkling eyes of the child echo.

Baktygul was born in 1972 and this picture was painted in the same year. The artist did it quickly: he clearly understood what he wanted. The long-awaited son, like a renewal of life. The picture is unique. The father paints it with small textured strokes, typical for Kyrgyz modernism. Held on the verge of pointillism. This is amazing: the brutal surface miraculously generates a space of comfort and love, the eternal essence triumphs over the fashionable form.