Gamal Bokonbaev, an art critic, author of 12 books, including a large volume “Fine Arts in Kyrgyzstan” (2007, 410 p.), books: “Fine Arts of Kyrgyzstan: periods of development. 1927-2015, painting, graphics, sculpture, contemporary art “(2015, 160 p.)”, The Union of Artists of Kyrgyzstan: Activity and Creativity “(2016, 234 p.), as well as the organizer of several dozen exhibitions in Kyrgyzstan. An architect, designer, artist by education. In this article GAMAL CONTINUES EXPLORING, what Chokmorov pictures can tell us about the artist world. 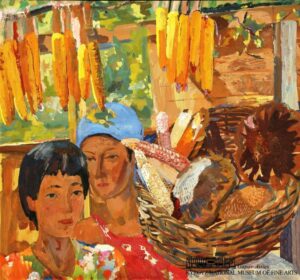 Corncobs are drying, hanging on a wooden veranda, lying, peeled of leaves, in a large wicker basket. It also contains sunflowers with dried petals and hardened seeds. Overlooks the green garden. It seems that the woman in the blue headscarf is holding a large basket on her shoulder. Ahead is a girl in a colorful dress, with a shock of black hair. Picturesque collage of interweaving of meanings, forms, colors. Ocher intensifies to brown; enriched with a variety of greens; the sun’s rays add yellow cadmium to it and whiten it to whiteness; finally, she calms down in the shade, peacefully coexists with black, red, variegated, and argues with blue dissonance! The whole spectrum of the autumn gamut, the harmony of combinations, the beauty of the elusive and obvious! And the center of the composition suddenly becomes … blue! The woman in the blue headscarf! Who is she? Perhaps this is a real person, or perhaps a vision. The female images of Russian art wonder. Petrov-Vodkin interpreted the East as an Orientalist. And the girl’s face is no longer admiration from the outside, it is the beauty of the fundamental principle. However, the woman in the blue kerchief looks not that alien … it is familiar, but not native. Is Orientalism the other way around? Chokmorov is the first postmodernist in painting in Kyrgyzstan. He traveled a lot, saw and knew a lot, and perceived the world as a deafening variety. Hence the depth and richness of associations. Incomprehensible complications seemed like a disadvantage, now they look like a virtue. Picturesque prophecies are hidden in picturesque riddles. 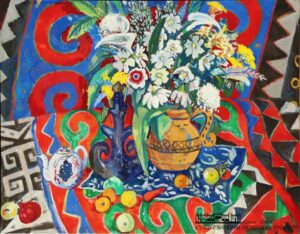 Gulkayir, white mallow, herbal flowers in a yellow ceramic jug. They are in the center of the composition. Nearby are: a vessel made of leather, kөөkөr, blue in the shade of the petals and brown in the light; a white teapot with a vine pattern on the side; pepper, pomegranate, apples, peaches and apricots. Not all fit on the blue rectangular napkin: the teapot and fruits were on the applique felt carpet. Two or three shyrdaks filled the entire background, the entire horizontal and the entire vertical plane. On the left, there is a part of the pattern characteristic of a chiy mat. Why are carpet designs so aggressive? They are huge, open-bright, red-blue, red-green, and black and white. Concentric swirls, round and square, with characteristic piping on the sides. Straight lines of triangles are like guards. The carpet patterns are akimbo, they are not here to be background extras, and they are the main ones here! They themselves can become a separate topic! You forget about flowers. The fierce beauty of contrasts distracts attention from subtle nuances. It seems that it will be easy for healthy handsome ones to defeat the charm of those who are exquisitely ill with blues and decadence. Can you defeat this charm? The pale beauty of “Russian Art Nouveau”. 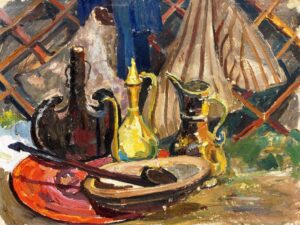 The utensils necessary in the everyday life of a nomad are simple and practical: kөөkөr – a vessel made of leather, unique in shape; kumgans – narrow-necked copper and brass jugs; a wooden bowl, a ladle, a large painted tray. On the diagonal frame of the yurt called kerege, hang a chanach, a leather bag for kumis; and khurjun, a traditional oriental saddle bag. Natural colors, natural dyes – red and light ocher. Ocher wood, brass, smoked leather. The year the still life was created is the year in which the artist became an actor! He played the main role – the role of Bakhtygul – in the brilliant film by Bolot Shamshiev “Shot at the Karash Pass”. This still life could well have been recreated on the set, and the artist could very quickly, in between filming, capture the authentic life of the nomads at the beginning of the last century. This will form the unique manner of the artist-actor. There will be two palettes too: a palette of natural colors for depicting a patriarchal life; and aniline palette for depicting the paradoxes of the city. The most importantly, the necessary speed will appear! Modernist speed, graceful brevity, true brevity! The artist creatively uses the finds of Cezanne, Matisse, “Jack of Diamonds”. In Soviet Kyrgyzstan, colleagues welcomed the master’s searches and finds. Now, in most cases, the consumer needs a tiresome resemblance to the detriment of artistry, detail and slickness – instead of the pristine freshness of color.

The whole space of the painting is occupied by wildflowers. We see only the upper part of the large vase and in the liter jars in which they are located. Yarrow, valerian, sage, poppies, buttercups. Various shades: white, yellow, red, purple, blue, green and brown. Flowers painted on a vase add to this abundance of colors. Drawn and lively – this theme is often found in the paintings of the artist. Here, what is drawn is driven into the frame of the plane, and the living is overflowing. The sun snatched splendor out of the darkness, and the artist keeps it in the light so that people can admire it for a longer time. O din of the author’s best fast still lives. Lights, shadows, reflexes are still visible, but it seems that a little more, and specific objects will disappear – the mood will remain. The small circle on the left speaks in favor of abstraction. It holds all this bulk of forms and colors in the necessary harmony. There is a need in it and it appeared. What is this? Does not matter! Abstraction! Maybe something came from above? Maybe a Bumblebee? It doesn’t look like it, but I want to think so. Then it will turn out, as in the poem “Impressionism” by Osip Mandelstam: “… And in this sunny collapse / A bumblebee is already in charge.” 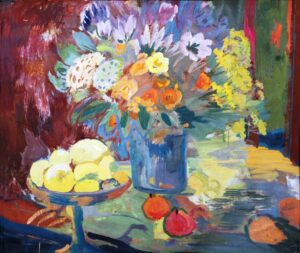 Right in the center on the table is a bouquet of wildflowers, in a wide vase, or just in a three-liter jar. On the left is a dark brown shadow, on the right is a dense veil of greenery. It seems that from there, from the open door to the veranda or to the balcony, a playful breeze quietly slips into the room. But monophonic, brown and green, will not allow frivolity and frivolity and firmly hold the multi-colored bouquet on both sides. Vase of lemons hinders this symmetrical statics; it is extremely active and stubbornly draws attention to itself! Plums and pears remain in the shadow of this battle of contrasts. It happens in life: some in the light, others in the shade. And for the artist: light and shadow, fruits and flowers – these are only sources of color sensations. He quickly understands the most complex lighting and skillfully places the heroes of his pictorial drama in their places. The sun’s rays shine through many random objects, bounce off them and illuminate yellow! Yellow lemons, yellow buttercup and illuminated yellow table edge! Here it is – the real center, the real triumvirate of composition! And here no one interferes with the regal procession of the bouquet. A vase of lemon supports him from below, leads him almost by the hand, plums and pears from the shade cheer him up, and the music of colors sounds happier and louder. And the brown-green severity obediently weaves behind.