Art critic GAMAL BOKONBAYEV CONTINUES to introduce us to the collections of the State Museum of Fine Arts named after G. Aitiev.  Our State museum has an impressive collection of works by Suymenkul Chokmorov.

On the green grass in the shade of a flowering apricot, six boys are sitting and the viewer can guess a girl sitting there too in a red scarf. They look at a girl in a red dress passing by. They do not look at the woman who is walking behind the fence. A gray donkey is resting on the left, he is not looking at anything, and he is just tired. In the opening of the fence on the right, the figure of a girl is darkening, she is nursing a baby, and she is interested in finding out what is happening on the street. In the distance, one-story brick-colored buildings can be seen. A rail fence divides the composition into two parts. The lower one depicts people and their worldly concerns. The top two-thirds of the painting the artist fill with a dynamic fantasy of brushstrokes, spots and dots of lilac shades. Spring flowering. In the upper part, the blue sky is visible between the branches. Kyrgyz artists often used this motif: a household bottom and a fantastic top. However, there are horizontal connections here, more complex. Mom walks heavily to check on her daughter with a little one, wants to know if everything is all right with them. It becomes clear how fragments of life are located horizontally: the responsibility of adults and the first scoundrel feelings, curiosity and shame. We realize that this composition is thought out, and all the figures are placed here for a reason. The artists of Soviet Kyrgyzstan were able to do this, and the artists of the Kyrgyz Republic have completely forgotten how to apply this. 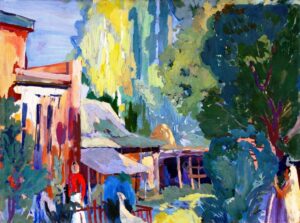 An overgrown rural courtyard. Lush greenery, grass, trees and bushes filled all space. Fragments of outbuildings, a haystack and female figures are visible. In the light, the colors are yellow-green, with yellow and red ochre streaks. In the shade – light blue and light purple. The artist is sure that abstraction itself creates the right mood! Color creates a plot, and more the play of lines and spots. The blue, even sky has settled at the top and with its calm appearance refutes the courtyard riot of shapes and colors, and seems to be quietly hinting to local activists: “Yes, calm down, finally. There, not far away, perfectly adjacent to you, exactly the same creatures as you are. And they are just as violent!” However, the “locals” do not calm down…

All creative people turned to the theme of childhood and looked for the life-giving sources of their creativity there. Is it a ram? With such a long neck? He reaches out to the woman in red. Then a woman in a large white headscarf resembling a veil. The eternal bride? Is there a flaw or a subconscious? The artist had a difficult childhood, tormented by a hereditary disease. Naturally, he might be willing to make a fairy tale out of a cramped courtyard. Besides there will always be a place for a piece of the sky to which you want to fly, breathing in kilometers of freshness and health!

The original kalpak* protects a tanned face from the midday sun, the shirt collar is unbuttoned. It is clear that the artist caught the shepherd by surprise, in casual clothes, in the most ordinary conditions. The shepherd agreed to pose and at the same time takes a break from work. There is gray in the beard, black mustache and eyebrows, one eye is red with streaks. A strong, lean, smiling aksakal on the background of a green meadow. In the upper right corner, a dandelion turns yellow with an accent. A quick pictorial sketch made for the future, counting on the development of the topic. However, over time, the talented sketch acquired the significance of a completely independent work. Here it is – the power of realism! Here it is – the importance of working from nature! This type of a man has not been preserved! This attitude has not been preserved. In the USSR, there was respect for ordinary people. In addition, ordinary hard workers respected themselves. They wore practical kalpaks of a “local manufacturer” and did not try to look more decent, did not hesitate, and there was nothing to be ashamed of. It is impossible to repeat this unique Soviet pathos, to revive a socialist utopia.

Hunters sit with hunting birds near the yurt. A young man holds a golden eagle and an aksakal holds a falcon. They hold birds on gloves made of thick leather. Another golden eagle is sitting in front of them on the right. Golden eagles have a leather cap called “tomogo” on their heads, covering their eyes.

The composition is based on a complex alternation: three hunting birds and two hunters. The color is shades of bleached ochre and brown. The color of the yurt dominates here. Below, the ground is made of red ochre, in the distance expanses of green shade. Stand out: the elder’s blue clothes and his white beard. It is clear that the aksakal was painted from nature, it is impossible to invent such a vivid image. The artist used technique of modernist painting: the contrast between the literal and the scheme, the natural and abstraction. It reminds us “The Boy with the Fish”, the highest achievement of orientalism in the work of early Semyon Chuikov; “Kyrgyz primitivism”, the leader of which was Vladimir Obraztsov … In the 70s, and the artists of Soviet Kyrgyzstan depart from the principles of classical socialist realism and turn to the formal achievements of the 30s. This movement was later described as the search for formal concepts. The method did not touch any real problems, which made it possible to work freely on the form. It was always possible to refer to the fact that the author is working on the national continuity of the socialist content. In fact, it was possible to create a unique form! A form that spoke of enriching the national School of Painting! About the continuity of traditions and something else unspeakable…. Now the ability to talk in a form about something more has been reborn into meaningless mannerisms. Moreover, it is impossible to get rid of the impression that elongated figures are something from the field of the ethnographic salon.