Art critic Gamal Bokonbaev CONTINUES to acquaint us with the collection of the Museum and the work of the artist and actor Suimenkul Chokmorov. The State Museum of Fine Arts owns a significant collection of works by Suimenkul Chokmorov, so our review focuses on him in several parts. Museum does not expose in its halls all the works on a permanent basis. Many of the paintings that we brought to your attention in this review are stored in storerooms and are waiting in the wings, when Museum organizes the next retrospective exhibition of the Chokmorov paintings 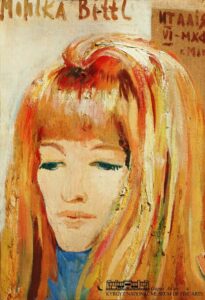 The artist often painted portraits of foreign cultural figures. There is a portrait of the famous Italian film actress Monica Vitti in his collection. In the 60s, it is an icon of existentialism in the famous “trilogy of alienation” by Michelangelo Antonioni – “Adventure”, “Night”, and «Eclipse”. Fury and barrenness, beauty and bitterness, well-being and loss of the meaning of life. It was fashionable in the first half of the 60s: to suffer for something unclear. The more incomprehensible – the more ingenious. We understood that this was not a Philistine cinema. At the same time we did not understand – what prevented these people from just living a normal life? They had everything: money, talent, beauty. Moreover, they, you see, suffer from general alienation and commit senseless acts. Well, maybe even not actions, but eccentricity to the public… However, there is none of that in the portrait. No complexity, too simple blonde-haired woman. Too fast sketch from nature. Too lush hair and a pale face, transparent skin, green eyelashes, eyes, a blue turtleneck. As if in the light of neon lamps, our Soviet artist met an emancipated woman from the West, free in the manifestation of her sexuality. This is how our Soviet artist saw her and honestly depicted what he saw. In the USSR, everything was different… A woman in the USSR was emancipated too, and even had more rights than woman in the West. Still in the USSR, everything was different…

At the top of the picture the inscription: MONIKA B(V)ITTI ITALY VI MFF MOSCOW. There are illegible letters, Latin alternate with Cyrillic. It is clear that in 1969 Monica Vitti came to Moscow for the VI Moscow Film Festival, the interview of the actress to Alexei Kepler in the Kinopanorama television program has been preserved. Perhaps then, this portrait was made. The attribution date is most likely the date the museum purchased the work. 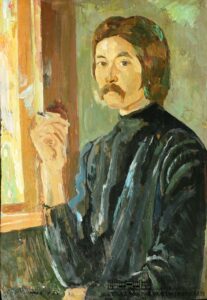 A mustachioed young man in a black sweater with a cigarette in his hand looks directly at the audience. In the look of a question and a challenge. He is confident in his vocation, in his right to deal with the most urgent problems of our time. Reflections visit him in the office at the desk. The background of the portrait is a wall and a window. The desk is not visible. Spectators note an unnaturally large hand. Perhaps the main thing here is a hand with a smoking cigarette, which, together with a look, symbolizes the determination to provide answers to the most pressing questions of our time. They face these tasks – no less… But, most likely, this is a preliminary study for a big idea and it was made without specifying the ratio of large masses. The main thing is the mood! Cheerful, bright, optimistic. In 1986, ten years later, the artist will paint the film “Filmmakers of Kyrgyzstan”. There, Gennady Bazarov stands in the same position, without a cigarette, in a turquoise jumper, in the dark space of the pavilion. Looks tougher and preoccupied with production issues. In the meantime, before us is a handsome thirty-three-year-old young man, a talented artist, with an open look and pure thoughts. In the future, Suimenkul will star in Gennady’s films, such as “The Apple of the Eye” (1976), “Kanybek” (1978), and «The First” (1984). 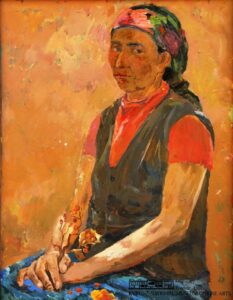 Stylish work, no patterns. The painting itself becomes patterns for the master. The laconic composition, exact pattern and colors are brought to a common denominator. Required blue. Autumn ocher is enhanced not by shades of red, green, brown, but precisely by this contrast of blue. Ordinary woman, ordinary appearance. Imperceptible in life, you will not pay attention, but the artist decided that this is a portrait of autumn! Brutal harvest goddess in Soviet Kyrgyzstan? However, from antiquity is already far away. It was fashionable: to make the hero of a simple person in simple clothes with regional specifics. A worker and a peasant woman with big hands and swarthy skin. In the 70s, it was fashionable to make ordinary Soviet citizens the heroes of works of art. The pathos of the builders of communism was fading away.

However? what’s inside? What did attract the artist to this nature? The portrait is undoubtedly painted from life: one cannot imagine this pose, face, wary look. Why this is an autumn portrait? An autumn portrait depicts the time of the crops harvested and the worker relaxed, when she turns into a beautiful lady with a mysterious look and a withering barberry branch in her hands. 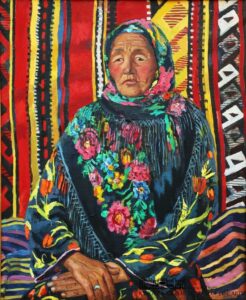 The labor veteran sits with his overworked hands folded in his lap. She is on a well-deserved rest. Horizontal lines indicate a soft seat; vertical lines indicate a flat wall carpet. Composed verticals dominate; these are complex combinations of red, yellow, black and white stripes. In the center of the composition, there are patterns of a dress and a scarf. Flowers draw volume; follow the movement of the figure. Picturesque irregularities enliven the background graphics. The main thing here is the face and hands. Logically, they should have become the spiritual center of the portrait. However, that does not happen. Patterns dominate. A human being is just an addition to the game of contrasts. As if, a veteran is only a dress and a scarf. This is no longer social realism – this is Soviet modernism. The artist is not satisfied with stereotyped themes. He is looking for other approaches and other interpretations. The name for it is just a phrase. Veteran of labor – we do not know who she is. Not a single hint from the author. The artist thinks different, whoever a person is, and she cannot tear herself away from her … patterns. Patterns are traditions and habits, roots and everyday life, eternal and transient. Soviet reality and something behind it. These are our codes. Not understood, not understood.

This work shows that the master, starting from the 70s, all the time worked simultaneously in two directions, alternately changing approaches depending on the state of mind and creative tasks. 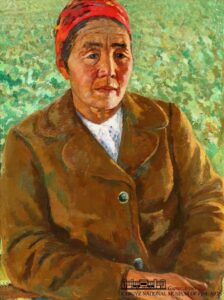 Most likely, this is a portrait of the Hero of Socialist Labor Kulsara Sulaymanova. In 1956, at the age of 26, she became a brigade leader. Her team was the best in the area. By the Decree of the Presidium of the Supreme Soviet of the USSR of December 31, 1965, for the successes achieved in increasing the yield, increasing the production and harvesting of sugar beet, Kulsara Sulaymanova was awarded the title of Hero of Socialist Labor with the Order of Lenin and the Hammer and Sickle gold medal. In 1976, Kulsara Sulaymanova was elected to the Supreme Soviet of the USSR. Kulsara Sulaymanova was a mother-heroine, having 12 children. In the portrait, the artist gives his interpretation of the concept of “hero of the people.” We do not see orders and medals, there are no petty-bourgeois beauties. A calm and self-confident person, such as she is. No decorations or embellishments. Beige suit of Soviet baggy design. Big stupid buttons. A triangle of a dazzling white mottled shirt sticks out. The revolutionary scarlet scarf turned into a shapeless scarf. The figure filled the entire space, even the arms extend beyond the edges. The background is a green beet field. The face is worked out in detail; everything else is painted in general terms. This is not a severe style of brutal form. Here frankness is ugly. Moreover, this is modernism… In Kyrgyzstan, formal portraits were rarely painted, and if they did, they did it somehow wrong. There is a common phrase that socialist realism is the praise of the authorities in a form accessible to the authorities. However, in this case it is not. Of course, such a “too truthful” work was allowed to be done by a people’s artist, a laureate of the Lenin Komsomol Prize, a favorite of the international public. I believe that “Soviet modernism” was created by successful real people, majors* in the existing party, administrative and economic system.

*Majors – Spoiled from childhood, not knowing the refusal from wealthy parents, are called majors in post-soviet slang 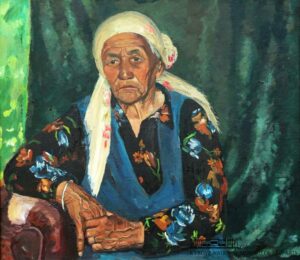 In the 1980s, the master returned to a realistic interpretation of nature, but compositional solutions remained sharp, unexpected and meaningful.

Most likely, the portrait depicts the elder sister of the artist BAGDAT, born in 1928. The artist also had a younger sister, NASIKAT, born in 1942. By the time Suimenkul Chokmorov painted BAGDAT she was 57 years old. Nowadays we do not consider a person if this age being old, however, a life full of trials, hard peasant labor, prematurely aged her. The artist depicts everything as it is. Large, overworked hands, swollen veins, a tanned face, and deep wrinkles he painted in detail. Life was full of worries and work. However … like the life of the artist himself. Sitting tired, leaning on the armrest (armchair or sofa – it is not clear). A simple face, full of inner dignity. The sad eyes – there is something to remember, not bright, not joyful. Dignity and sadness, a black dress and a white scarf, a gray-blue vest and a dark green curtain. The elements of the composition balance each other and create a mood of peace and tranquility. What about the face and hands? Not with an armrest… That would be too easy. The collar of the dress is turned away and the drapery is pushed back, and behind it – greenery! In contrast to the naturalism of the portrait, the impressionist paints it! So that we touch, feel, breathe in a clear sunny day in the yard, spring is in full swing! Life goes on!