Home › Home list › Education › THE FIRST TEACHER CONTEST › CONTEST DIARY › WHETHER THE VILLAGE NEEDS A MUSEUM OF LOCAL LORE – WHAT PRIMARY SCHOOL TEACHERS THINK. THE 2ND ROUND OF THE 2020 TEACHERS’ CONTEST AND THE AWARD CEREMONY

As in previous years, we present you a report on the 2nd round of the competition of rural primary school teachers “First Teacher” 2020 and the Award Ceremony. This annual competition is the ninth. The event, scheduled for September 12, 2020 due to restrictions related to COVID, was postponed, and took place in 2021, on Saturday, January 30, according to tradition in the Assembly Hall of the I. Arabaev KSU.

Here is a photo gallery of this event:  FIRST TEACHER 2020: 2ND ROUND AND WINNER’S AWARD CEREMONY

The Sanjarbek Daniyarov Foundation expresses special gratitude to the rector of the University, Professor Tolobek Abylovich Abdyrakhmanov, and the entire university management for their long-term support of the competition by providing an opportunity to hold an event within the auditorium of the university educating the future teachers.

Every year, the participants of the 1st round of the competition write an essay, and in the second round they prepare oral assignments dedicated to the chosen topic of the year. The theme of 2020 “MY MUSEUM OF LOCAL LORE” turned out to be successful – it was interesting to the participants, many even shared their intention to create such a museum at school or in their village with the help of students. There are also places in our republic where museums already exist, in these cases the participants expressed their intention to enrich them with new information and exhibits.

Continuing the already established tradition, we try to invite interesting guests – experts on the topic of the year. We can safely say that every year the speeches of our Honored guests fill the event with valuable content, give the necessary completeness to the discussion of the topic of the year, and serve as an impetus to continue working on it. We will try to keep the bar at a high level in the future! After all, for the second round, participants come to us from all corners of our mountainous republic – both those who reached the final and those who did not win a prize. Teachers are driven by their interest in exchanging opinions, communicating with colleagues and guests of honor.

The participants listened attentively, even without exaggeration, with bated breath, to the speech of Dinara Chochunbaeva. Our guest is familiar to a wide audience, as the performer of the leading role Asel in the film “I am Tien Shan” based on the story of Chyngyz Aitmatov “My Poplar in a red scarf”. Despite a successful film debut, Dinara chose the profession of an artist, and for many years she has also been known to the professional museum community and international organizations, in particular UNESCO, as an expert on intangible cultural heritage. In addition, Dinara is the general director of the annual Oimo festival.

Dinara very vividly, emotionally, involved talking about why it is so important to preserve our cultural heritage, to preserve the creations of masters, about how the process of collecting exhibits for the museum is important and useful for educating schoolchildren, for their creative development.

Her words were supplemented by Turdukan Usubalieva, the restorer of the  Museum of Nomadic Civilization named after Kurmanjan Datka. She specially came to our event from the northern shore of Issyk-Kul to share her thoughts on the importance of local history and ethnographic museums for our country.

It is a pleasure to note that the basis of the exposition of the Issyk-Kul Museum of Nomadic Civilization at the moment is made of a valuable ethnographic collection that Dinara Chochunbaeva gathered and selected for many years and handed over to the museum.

Another aspect of this broad topic was highlighted in her speech by Elnura Osmonalieva, director of the network of secondary schools of the Bilimkana Foundation and a film director. Elnura shared ideas on how to involve students in an active creative process outside the school curriculum. The teachers listened to the lively story, based on personal experience, with great attention.

Last year, the participants and guests especially liked the guest host of the program – a primary school teacher of secondary school №21 named after K. Karachev village Sary-Dobo, Tyup region, Issyk-Kul region Taalaibek Myrzabaevich Myrzabaev. We were glad that this year Taalaibek Myrzabaevich accepted our offer to host the event and did it professionally! Thanks to his ability to tactfully remind of the regulations, we were able to accurately follow the timing planned in the Event Program. And it was not easy, because the audience consisted of active people who had much to say, had a lot to share! We expect that Taalaibek Myrzabaevich will also host our next – 10th anniversary event.

There is one more tradition of our competition. We try to organize a mini-concert for the participants of the meeting, making it festive. Musicians of the symphony orchestra at the Bishkek mayor’s office, laureates of republican and international competitions, 4-5 year students of the Kyrgyz State Conservatory Kasiet Niyazbekova (cello), Stalbek kyzy Begay (violin) performed for teachers.

The duo performed three works – Astor Piazzolla’s tango from the film “The Scent of a Woman”, the Neapolitan song “O SOLE MIO” by Eduardo di Capua in the instrumental version and “the dance of the Cotton Grower” by Seydala Medetov, and “Wanderers in the Night” by Frank Sinatra as an encore.

Our teachers rarely listen to live music. We sincerely thank the young musicians – Kasiet and Begai, who in their free time from work and study provided our project participants with such an opportunity !

This year, the finalists of the 1st round – the participants of the 2nd round – were especially pleased with their high level of preparation. Those who closely follow our competition for primary school teachers in rural schools in Kyrgyzstan know that the participants with the highest scores for the compositions of the first round compete in the second round. Due to the fact that several teachers scored the same points, this year in the final 7 winners of the first round took part instead of planned 6 teachers. More information about them is in this publication: WHO WON THE FIRST ROUND OF THE FIRST TEACHER-2020 COMPETITION?

Among the 7 finalists in 2020, two were from the Aksu district of the Issyk-Kul region. And it is not surprising, because for the third year in a row, teachers of the Aksu district have been the most actively involved in the contest! Why? Read about this: HOW RESPONSIBLE ATTITUDE CAN GIVE COLLEAGUES A CHANCE FOR A FASCINATING JOURNEY  – about the specialist of the methodological office of the Aksu district education department Osmonbaeva Nazira Seitkazievna.

During the competition, the members of our fair and strict jury were often raised cards with a maximum score of 5! The difference in total points was very small, and therefore, as in the course of the previous competition, guests and fans could not predict until the last minute who would be the winner! Read about our jury in the material: THE FACE OF THE COMPETITION IS ITS JURY. WHO EVALUATES THE PARTICIPANTS OF THE FIRST TEACHER 2020 CONTEST?

Finally, we are pleased to announce the winners:

First place and the title of THE FIRST TEACHER:

BEKTASHOVA JANARA BEKTASHOVNA, teacher of the school named after T. Moidunov, Kazarman village, Toguz-Toro district, Jalal-Abad region. Diploma of the College of Foreign Languages ​​at KSU named after I. Arabaev, as well as bachelor’s and master’s degrees of S. Naamatov KSU, Naryn

It is pleasant to note that Farida Kenjealievna became the laureate of the competition for the third time, having won awards in the competitions in 2018 and 2019!

It is noteworthy that Umut Kurmanbekovna is a teacher of the same school where our guest program host Taalaibek Myrzabaevich Myrzabaev works as a teacher and head teacher, who himself took part in the 2018 competition.

Congratulations to the winners! Exciting cultural and educational trips await them!

PHOTO REPORTS ABOUT ALL 10-day cultural and educational travels of teachers who won the first prize and the title of “First Teacher” since 2011 here: “TEACHERS JOURNEYS“,

PHOTO REPORTS ABOUT ALL the travels of schoolchildren with their teachers, who took 1, 2. 3 places – CHILDREN TRAVEL

All teachers who took part in the 2020 competition and passed the selection for compliance with the competition criteria received in a solemn atmosphere from the hands of the jury on behalf of the Sanjarbek Daniyarov Foundation a Competition Participant Certificate. Also, the Certificate of Honor of the Sanjarbek Daniyarov Foundation was awarded to Turganbaeva Gulumkan Abytalypovna, who took part in the competition for the 5th time in 2020. Although she did not take a prize in the competition, it is worth noting that every time Gulumkan Abytalypovna scored high points.

It is especially pleasant to note that the contestants and members of the jury were presented with books:

GULNARA NURKULOVA made a generous gift – she presented her novel “TURSUN”, which has just been published, to 7 winners of the first round, to the host – Taalaibek Myrzabaev, 12 members of the jury and holder of the Certificate of Honor of the competition, as well as to the guests of honor.

As a gift from JAYNAGUL TAYGURONOVA they received the historical novel JANYL ABDYLDABEK KYZY “Shabdan batyr. Thorny milestones of the era ”. On behalf of the Sanzharbek Daniyarov Foundation, this novel was also presented to four participants of the second round and guests of honor.

The Foundation presented to the winners of the first round the Jusup Turusbekov’s “Selected works” and the “About yourself” children’s encyclopedia about the structure of the human body, both books published by the Foundation

In turn, the Guest of Honor Dinara Chochunbaeva presented the winners and the jury with calendars with photographs of shyrdaks, traditional Kyrgyz felt carpets.

In a word, there was a rich harvest of books!

As always, at the end of the event, all the participants were photographed together. 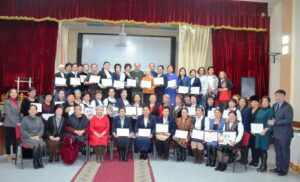 Our ceremony would not have been successful if not for the help of volunteers:

KURMANBEK ZHAANBAEV and GULAZIM BOLOTOVA, having learned about the event, offered me their help! Being, as they say, “on the sidelines”, that is, performing the most varied necessary work – assistance in technical support, preparation for the presentation of certificates and gifts, and others – they acted quickly and efficiently!

Of course, my dear relatives helped me:

GULSANA SAMANCHINA took over the interaction with the catering company, which provided morning coffee before the event and light lunch, and then was the “timer”, helping to keep track of the time.

Since many of the teachers participating in the first round could not come for financial and other reasons, we tried to organize a live broadcast. BAKHTIYAR Toktosunov and AIBEK Toychubekov helped us in this. Unfortunately, for technical reasons, we were unable to organize a flawless broadcast, but, obviously, next year we will take into account the difficulties.