Home › Home list › Education › THE FIRST TEACHER CONTEST › CONTEST DIARY › HOW RESPONSIBLE ATTITUDE CAN GIVE COLLEAGUES A CHANCE FOR A FASCINATING JOURNEY.

Help comes sometimes from an unexpected source – from someone whom you might have never seen before. This person does not even think of helping us, but his or her responsible attitude to any given task contributes to the fulfillment of the matter important to you. I am pleased to share this case from the recent history of our contest. 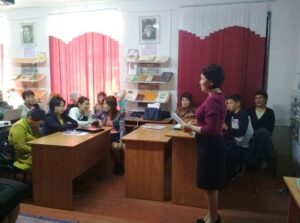 I will tell you about Osmonbayeva Nazira, the specialist of methodical cabinet Department of education of Aksuu district, Issyk-Kul region.

For the past seven years, our Foundation annually holds a contest of primary school teachers of rural schools of the Kyrgyz Republic. There are two types of awards to the winners: Foundation Award is “The First Teacher’s”10-day cultural and educational trip to Moscow and Special Prize in the form of cultural and educational trip to Bishkek for the weekend of the students of the entire class of three laureates. Teachers willingly apply for the participation in the contest as they like both – the awards and contest itself.

However, it turned out that it is very difficult to convey information about the terms and conditions of participation in the competition to teachers of rural schools!

We usually publish the announcement of the contest in the newspaper KUTBILIM, which is distributed to many schools. Unfortunately, in the newspaper ad it is impossible to put details of terms and conditions even more in Kyrgyz and Russian languages…

Usually I send e-mails to the heads of all Regional Departments of education of Kyrgyzstan, as well as to the regional methodological centers. I attach to the letter the regulations on the competition, the application form and the presentation with explanations for the participants. All information in both Kyrgyz and Russian.

One would expect the education system employees are interested in high number of teachers from the schools of their district participating in the competition and thus having chance to win. The Foundation bears all the financial and organizational costs … Unfortunately we cannot state that information and materials reach majority of primary school teachers in rural areas (Read more about that: OUR TEACHERS IN THE AGE OF INFORMATION TECHNOLOGY) 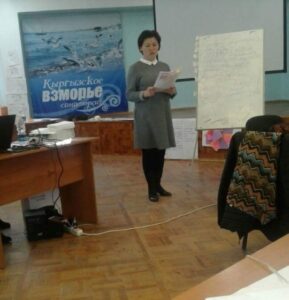 Now imagine, in Kyrgyzstan there are 40 districts, and 30% of 2018 applications have come from the one of them – Aksuu district of Issyk-Kul region! How did this happen? Why teachers from this place were the most active participants? We asked ourselves this question and found that OCMONBAYEVA NAZIRA, the methodolist of Aksuu regional Department of education, receiving our letter from her head, immediately forwarded the materials to all schools, and then carefully and consistently monitored whether recipients – primary school teacher – got these materials and if they had questions, whether they were interested in the contest and send their work to the organizing committee.

Thanks to such responsible attitude to the matter the teachers of Aksuu district did not miss chance to compete for an award! As a result, two teachers reached the final: Korobchenko Marina from the school named after Murat Kaliyev S. in Otradnoe village and Asimova Nazira from school named after Magrifa Rakhimova, of Chelpek village. Then Nazira Asanbekova even became one of the three winners of the contest, and now she, along with her students will perform in the cultural journey to Bishkek.

A few words about the person who helped our competition so much. 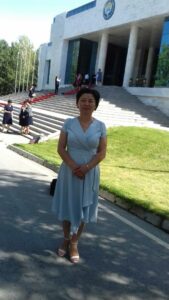 Osmonbaeva Nazira graduated in 2004 from Issyk-Kul State University named after Kasym Tynystanov as an English teacher, and came to work in the methodical department in 2016, when such offices were opened throughout the country. She came to work not just as a pure theorist, but having personal practical experience at school – her teaching experience is 14 years. Let us face it, sometimes she thinks about taking lessons at school again…

We sincerely thank Nazira for the effective support of our competition and we will be happy if in every district of the Kyrgyz Republic will also take care of primary school teachers when the next competition of 2019 begins!

Of course, we will definitely place an ad on our website with all the detailed information and, as always, send letters to all the district of the Kyrgyz Republic.

Our project has no commercial goals and is conditioned by the Foundation’s desire to support the authority and status of a rural teacher in Kyrgyzstan. The main prize to the winner is the prize of the Sanjarbek Daniyarov Foundation in the form of a 10-day cultural and educational trip to Moscow, the capital of Russia, with a rich program of visiting museums, galleries, theaters and other attractions. In addition, rural teachers who took 1, 2, 3 places are awarded a special Prize of the Sanjarbek Daniyarov Foundation – a cultural and educational trip for the weekend of all students of the three Winners to Bishkek, the capital of the Kyrgyz Republic.

WHAT DO YOU THINK OF PRIMARY SCHOOL TEACHERS ABOUT THEIR PROFESSION?

ABOUT THE PROJECT “THE FIRST TEACHER”. EVERY YEAR SINCE 2011

Photo album: THE FIRST TEACHER 2018: THE SECOND ROUND AND THE WINNER AWARD CEREMONY