Home › Home list › Education › THE FIRST TEACHER CONTEST › CONTEST DIARY › “MODERN HOUSE OF CULTURE IN THE VILLAGE” IS THE THEME OF THE YEAR. ABOUT THE 2nd ROUND OF THE 10TH “THE FIRST TEACHER” CONTEST & AWARDING CEREMONY

By tradition, we present a report on the annual event – the 2nd round of the contest of rural primary school teachers “First Teacher” 2021 and the Award Ceremony. The 10th contest was announced in 2021, and the 2nd round took place on April 23, 2022, after the pandemic restrictions were lifted. For the 7th time this event has been held in the Assembly Hall of the KSU. I. Arabaeva.

During the event, the winners and laureates of the competition were determined, awards were awarded, and the first recipient of the “Sign of Respect” award by the Sanjarbek Daniyarov Foundation was announced.

For the 3rd time in a row, we invited a former participant in the FIRST TEACHER-2018 competition, a primary school teacher of school #21 in the name of K.Karachev, of Sary-Dobo village, Tyup district, Issyk-Kul region Myrzabaev Taalaibek to be the host of the event for 3 times in a row. We believe that we have a wonderful host, because he is a modern educated person with a good language skills, a creative attitude to the task, a sense of the audience, an excellent knowledge of the work of a teacher. He is friendly and at the same time exceptionally responsible and organized.

As this year it is a 10th contest, the jury’s exit was especially solemn. The jury members of the second round of the competition may differ slightly from the jury of the first round, because our permanent members are, being in-demand specialists might be on business trips. At the same time, we have new winners of the contest every year, many of whom are invited to the jury. In the second round, this year the new member was the winner of the 9th competition Uzakova Umut, a teacher at school No. 21 named after K. Karachev, the village of Sary-Dobo, Tyup district, Issyk-Kul region (the same as our host of the event)

By tradition, the event was welcomed by the rector of KSU named after I. Arabaev – Professor Tolobek Abdrakhmanov, who expressed many warm words about the competition and wished a successful continuation of the annual contest. After all, our competition is for those and about those who are trained by the university, we are talking about teachers. In connection with the announced salary increase for teachers, the rector noted that now the task is to increase the prestige of teachers in our society.

After his speech, I shared with the participants why I held this competition for 10 years and will continue do it. The presentation is here: 10 YEARS OF “THE FIRST TEACHER CONTEST” (in the process of posting on the site)

ABOUT THE TOPIC OF CONVERSATION, SURPRISES AND GUESTS OF HONOR

Regular readers of the site and friends of our foundation know that every year we announce a new topic of the competition, on which teachers write essays in the first round and discuss it in one of the tasks of the second round of the competition. The theme of 2021 “Modern House of Culture in the Village” was a logical continuation of the previous topics: “Interesting Journey of Children to Your Village”, “Local History Museum in the Village”. As we can see from the content of the essays and from the discussions, the topic aroused great interest! The best essays, as always, are published in the relevant section education › contestants › essays by participants.

The theme also determines the choice and invitation of our HONORARY GUESTS of the event.

This year we invited Nurlan Asanbekov, artistic director, director of the Kyrgyz State Puppet Theater named after M. Musa Zhangaziev, Honored Worker of Culture of the Kyrgyz Republic. He shared with the teachers his ideas about what a national theater is, in particular, how he sees the national Kyrgyz theater. Telling teachers about the extremely important role of the dastan (epic) in our national theater, the director shared his personal experience of working and interacting with an international audience, accompanying the story with photographs of his own performances presented by the team in different countries. Particularly valuable was the director’s personal experience in creating theatrical performances for a children’s audience, in particular about the real role of theatrical performances in the upbringing of children, not only through their perception as spectators, but also by involving them in work as actors and directors.

The film director Ruslan Akun, who made a film about children and school (“In Search of Mom”), the series “Last Lesson”, which gained great popularity among the school community greeted the audience by video since he is currently out of Kyrgyzstan. His greeting was warmly received by the audience. The video can be viewed here: Ruslan Akun’s greeting to the participants of the “First Teacher” -2021 competition (being loaded)

Another favorite element of the annual event was a musical surprise – live music. This time we invited Asylbek Jusupjanov, a saxophonist, soloist of the brass band of the Bishkek Mayor’s Office. The musician performed variations on the themes of a well-known Kyrgyz melody and international hits. The effect of the performance turned out to be somewhat unexpected for the competition program – almost all the participants of the event got up from their seats and danced to the background.

ABOUT COMPETITION AND WINNERS

What was our surprise when, according to the results of the second round, three participants at once received an equal number of points! The jury members faced a difficult choice, who should be awarded the first place, and who should receive the second and third?

We could not give an additional task, because the participants arrived only for one day. The members of the Jury urgently organized a discussion on what principle identify the winner to be fair. They discussed several options: e.g.:

In all cases, there were pros and cons. In the end, they came to the conclusion that the most fair way would be to take into account the essays’ scores, since they were checked “blindly” in coded form.

Thus our winners are:

We sincerely congratulate the winners of the contest and wish them further success in raising and educating our children! Now the winners and their students will have exciting cultural and educational journeys!

We also timed the presentation of the “SIGN OF RESPECT” award to this event. This is a new project of the Foundation. It caused a very big resonance among teachers. The Sanjarbek Daniyarov Foundation established thos award to express appreciation for the work of experienced primary school teachers. One can read more about the awarding criteria & the procedures for selecting applicants here: ABOUT THE PRIMARY SCHOOL TEACHER’S “SIGN OF RESPECT” AWARD BY THE SANJARBEK DANIYAROV FOUNDATION

We have received numerous applications for the award from various initiators, and we are reviewing the documents for submission to the Board of Experts.

Despite the fact that the badge itself was not yet ready for the day of the event, we managed to present the #1 award to the first ever recipient of the “Badge of Respect”. It was our host of the event Taalaibek Myrzabaev, who fully meets the criteria for the award. The candidacy of Taalaibek Myrzabayevich did not cause doubts among any of the experts, he fully complies with the stated criteria and deserved the award of the society. We congratulate the primary school teacher and our presenter with a well-deserved award!

Read more about it HERE: (being loaded)

As always, the process of presenting the Certificates of participants, Diplomas of laureates caused a great excitement in the hall. Fortunately, we already have an established procedure that allows us to solemnly present certificates to each participant, without making the process too long. All members of the jury go on stage and “in a chain” pass the microphone to each other, announcing the names of the teachers and presenting the Certificates. By doing it this way we take pictures not only of each individual, but also in groups with 8 members of the jury. 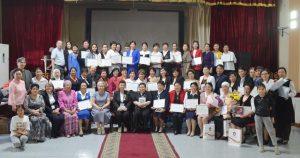 On behalf of the Foundation, I presented to all members of the jury, the hostand eight finalists the book “Bazarkul Daniyarov – the first teacher. Portrait against the backdrop of the era”, which I wrote in collaboration with Kutpa Oruzbayeva-Daniyarova.

The book is the best gift!

ABOUT THOSE WHO HELPED

I want to note that our ceremony would not have been successful if it were not for the help of volunteers on this day:

Bakhtiyar Toktosunov filmed the entire course of the event. I hope that in the future, those who wish will have the opportunity to familiarize themselves with the video material!

Kurmanbek Jaanbaev was always “in the right place at the right time”, being “on call” all the time, doing a variety of work, helping to fix the sound, watching the lighting in the hall, helping to put in convenient order the certificates of the participants, and much more.

As usual, my dear relatives helped me:

Vladimir Schwartz, as in previous years, photographed the entire course of the event.

Asel Jumakova and Bektur Daniyarov recorded the scores that were shown during the evaluation by 8 jury members to 8 (eight) participants according to three criteria in the first task and two criteria in the second – a very important role, you can’t make a mistake here!

Janyl Turusbekova took over the interaction with the catering company, which provided morning coffee before the start of the event and a light lunch.

Student volunteers also volunteered to help us, we entrusted them with the work of registering guests and selling books.