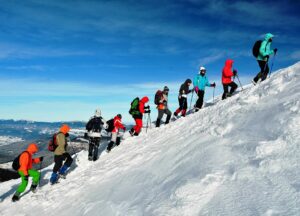 The first round of the 2021 contest has ended. Yes, 2021, I was not mistaken with the date. Just because of the restrictions associated with the pandemic, the schedule of our competition has changed, but we continue our competition, everything goes on as usual! It is time to get acquainted with the results of the first round! Who will compete in the second round for the prize, and who will will move from participants to the fans and observers?

I remind you that the teacher who took the first place receives two awards: the Sanjarbek Daniyarov Foundation Award – a 10-day cultural and educational trip to Moscow, and a Special Prize of the Foundation – a cultural and educational excursion together with his entire class for the weekend to Bishkek. This Special Prize is also awarded to the teachers who took 2nd and 3rd places in the second round

This year, 100 teachers sent their essays to the first round of the competition as a whole. Finally 66 essays were selected after the checking for the absence of plagiarism and for compliance with the conditions of the competition set out in the REGULATIONS on the 2021 COMPETITION.

Participants liked very much the essay theme of the 2021 according to their feedback: “THE MODERN HOUSE OF CULTURE IN THE VILLAGE”. Many immediately thought about the fate and role of the House of Culture in their native village.

11 members of the jury participated in the examination of 66 essays, all of them are experts of the education system, and five of them are winners of previous contests “First Teacher”. You can read about our jury here: THE FACE OF THE COMPETITION is ITS JURY.

As always, in our competition, the jury members received the essays in encoded form and did not have the opportunity to see the names, names, addresses and place of work of the participants. Each essay was checked by 7 members of the jury according to a 5-point system according to 6 criteria. Thus, the highest score a participant could get was 210 points (i.e. 7 x 5 x 6 = 210 points).

We present our finalists of the first round of the competition:

ISAKOVA NURZHAN SHAMURATOVNA
teacher of secondary school No.31 named after Y. Chanakov of Kyzyl Sengir village of the Suzak district of the Jalal-Abad region. Finalist of 2019.

We sincerely congratulate the teachers on reaching the final of the first round and are waiting for an interesting competition of 8 teachers in the second round for three winners!

In general, out of 66 works, 12 were sent by participants who had previously participated in our competition, including one of the participants sent a work for the 6th time, and became a finalist!

As for the regional alignment, it is as follows:

We are waiting for all participants – 66 teachers as participants and guests of the 2nd round and the Award Ceremony of the winners of the competition! All participants of the 1st round will be awarded certificates of participants. The preliminary date of the event is the first half of April 2022, on Saturday. The final date we will definitely announce on this site no later than two weeks in advance.

We publish the Program in advance, as always. Who will be the Guest of Honor of the 2nd round of the competition and the Award Ceremony this year?