Do we give chance to our Kyrgyz children to develop according to their age, to be confident, to enjoy the process of learning about the world? Is there probability we leave a significant part of them “outside” of normal intellectual growth and education?

This question came to me after holding the 5-th contest of rural teachers, “THE FIRST TEACHER”. On the one hand, through organizing the contest and awards, I got acquainted with charming people – rural primary school teachers. Definitely the contest participants make up the active part of the education community. But on the other hand, I learned a lot about the village school, about teachers, about parents, about children, about the administrators of the education system and the system as a whole, including the problems in it. Some problems lie on the surface, but if one does not personally encounter them, they somehow remain on the periphery of consciousness.

And these problems are serious, and I am not afraid to say, state-level priority. We need immediate action and the involvement of the whole society to solve them: both parents and professionals of the education system. 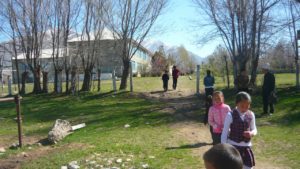 In my opinion, of such a large-scale problem is the fact that a considerable number of children from Kyrgyz-speaking families doomed to lack of education, underdevelopment, loss of interest in learning and a greater likelihood of low self-esteem. Why?

This risk arises from the moment of school choice by parents.

It seems to me axiomatic that the people of the country should know the state language of their country. In Kyrgyzstan it is, of course, Kyrgyz. At the same time, educated person who wants to live life to the full, have a broad outlook and a good professional education, of course, needs to know at least one language more and preferably two more. With regard to Kyrgyzstan, the second most used language both de jure and de facto is already Russian language. A significant part of the population is bilingual, which owns Kyrgyz and Russian at least at the household level.

However, it is not a secret to anybody that a significant part of the urban population speaks well only Russian and cannot fully communicate with the other part of the population, which has little knowledge of Russian. At the same time, the Kyrgyz language is the most spoken language in the communities in rural areas of majority of regions, people speak mainly the native Kyrgyz in the families. Note that the rural population accounts for about two thirds of the population, i.e. the majority. Thus, the majority of Kyrgyz citizens on the domestic level speaks Kyrgyz language, and in official life uses the Russian.

Many of rural residents have formed the belief that for those who were educated in Kyrgyz language, career success and material well-being become less achievable, if not actually closed. For this reason most parents seek to give first-graders in a Russian-language school or class. And in this moment the actions of the parents lead to the result opposite to their aspirations.

Why parents associate happy life with a Russian class?

First, there is a common view that urban resident on average live financially better than rural areas habitants. And in the city Russian language dominates, at least in public life. Second, the flow of migrants heading for work, primarily to Russia, and therefore they need a good knowledge of the Russian language. Thirdly, higher education only recently became available in the Kyrgyz language, and not in all specialties, for example, it’s not available in medicine. Fourth, perhaps, some role plays the practice which existed for many years in the past, of school teaching that presents the Russian language as the main or even the only window into the world of literature and culture. No doubt, Russian literature and art are rich, substantial and are an integral part of world culture. But this does not mean that they have to displace and replace the native language and native culture. Supplement is another thing.

Whatever it was, a considerable part of parents seeking to send their children to Russian classes. It should be noted that many Russian-speaking classes taught by the teacher-Kyrgyz, that is, parents do not prefer teachers of a different ethnic background, namely, they are for the possession of subjects in Russian language.

The parents’ choice of the “wrong school”– what are the consequences?

And then there is a SERIOUS COLLISION. Parents do not take into account that children do not speak Russian to the extent that is required for learning in different subjects. Many even believe that it is a teacher’s duty to make the child both to have the second language learned and mastered the skills of reading and numeracy. But the program is not designed for it. In a Russian school program is designed for the study of Russian as a native and not Russian as a foreign language. A first grader doesn’t understand the Russian language, and he must learn this language to read, write, count and much more – all fundamentally important to the intellectual development appropriate to their age.

The student is not receiving an adequate Foundation of knowledge and skills. There is a delay in development compared with peers. During class the student tries to understand what teacher explains to him what he is talking about. And the lesson time should be spent on developing skills of cursory reading, working with texts, understanding of material, ability to ask questions and to answer them, to express the main idea of the work, to make their own story or retelling, learning counting, addition and subtraction, and so on. Even if the teacher is bilingual, and can theoretically explain to the student the difficult moments (which, apparently, occurs often), it does not help the situation, because there is only so much room in the lesson, and the student in the class is not alone.

Not only that, in the time critical from the point of view of mental development and gaining basic knowledge, the student just tries to understand the speech of the teacher. It is also important that the misunderstanding of the subject often leads to the loss of interest in learning in general, discomfort in school, and the unwillingness to learn. Along with this the children can lose confidence in their own abilities, develop low self-esteem. The result of learning is just the opposite of what anxious parents have in mind giving their children to Russian-language class.

I leave out of this publication, the formation of interest and respect for native language, study of its wealth and subtleties of speech.

So, we have a generation of children from Kyrgyz language families, among which considerable number are doomed to lack of education, underdevelopment, loss of interest in learning and the risk of low self-esteem! Is this not a tragedy? The problem should be solved urgently.

What are the solutions?

It seems clear that we need to work on improving the higher education system and, first and foremost, in the Kyrgyz language. This is a very large and long-term goal, we can say, giant goal, which has to be written about and discussed separately. Here I would only say that it will be achieved in the future, only if start working on it now.

What actions are necessary in today’s school to solve the problem? Paradoxical as it may sound, I think the recipe is in rising seriously and efficiently the level of Russian language teaching in Kyrgyz schools. To raise to the level giving the parents confidence that their daughter or son, educated in the Kyrgyz language school has chance to master Russian language by the graduation time to the level comparable to a graduate of a Russian school and will be bilingual. In other words, to create a situation in which Kyrgyz language families would send their children to Kyrgyz language class, being sure they do not deprive children of some opportunities.

How to achieve this is a question for the professionals of the education system. It seems to me there is a need to increase the number of hours of Russian language in elementary school, maybe not in the first year, but maybe in the second or third. One may need to look critically at the teaching program. But, more importantly, perhaps, is to prepare teachers. Maybe teachers of Russian-speaking classes could be a part of the reserve. There is an urgent need to increase enrolment in higher education institutions for the specialty of Russian language teachers for the Kyrgyz school and give this faculty the maximum attention of the state. All this, of course, will work with the simultaneous creation of material incentives for teachers of the Russian language in Kyrgyz schools (possibly in parallel for the teachers of the Kyrgyz language in Kyrgyz- and Russian-speaking school). Only then the students will go to UNIVERSITY to study in the respective specialty. Inducements are not limited by wages increase in this group of teachers. It may also be the assistance with acquisition of housing and other incentive programs. The main thing is that they have to be substantial and real.

It is obvious that even if a sudden significant increase in the quality of teaching the Russian language in Kyrgyz language class (or school) will happen by magic, the parents’ opinion will not change in one day. However, the rapid, serious, thoughtful and decisive measures can help us to achieve the goal in the medium term. In parallel it will be necessary to conduct explanatory work with parents about the importance of the timely receipt by their children’s knowledge, skills and abilities in accordance with the requirements of the primary school leavers.

In short, we must exert maximum effort to rotate the flow in the direction of Kyrgyz language school or class, but not using the cavalry method, and by adjusting the level of teaching languages in schools, training and recruitment of qualified teachers, outreach to parents. All this, coupled with the further introduction of the Kyrgyz language in high school.

If readers of this publication disagree with my observations and conclusions, I’ll be happy to know the arguments that underpin different or even opposite point of view. I invite you to dialogue, to discussion, including discussion on the Foundation website. Those who agree, I invite to think more thoroughly and to prepare proposals for the education system.

The main thing I wanted to achieve at the moment is to name the problem, to attract the attention of both parents and teachers, and leaders of the education system and scientific community, and the country’s leadership, to make a correct diagnosis of the problem, to encourage the search of solutions and take effective measures.