BOOKS AND ARTICLES ABOUT B. DANIYAROV 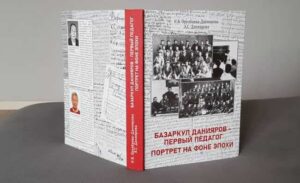 Currently in Russian. The Kyrgyz version of this book is scheduled for publication in December 2021.

The book is dedicated to the life and work of the Kyrgyz educator Bazarkul Daniyarov, who stood at the origins of primary, secondary and higher education in Kyrgyzstan, who, together with his associates, prepared a whole galaxy of outstanding cultural and educational workers of the republic, the first curricula and textbooks.

The book tells not only about the selfless work of the teacher, but also about the activities of representatives of the intellectual elite of the first third of the XX century, saturated with major political events. This is a documentary work about passionaries who devoted themselves to the cause of enlightenment and who died tragically as a result of Stalin’s repressions.

The book uses and presents:

The book is addressed to readers interested in education, national history, especially teachers, students of history, philology and pedagogical faculties.

The publication is provided with a personal index, which contains about 400 names. 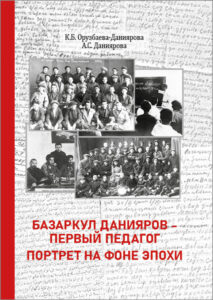 The printed book is available in RARITET chain bookstores in Bishkek, as well as in libraries.

The electronic version (in Russian) can be downloaded here:

The book was published with contributions collected by members of the Daniyarov family. The authors are grateful to everyone who contributed voluntarily to the publication of the book.

We welcome feedback and criticism from readers under this post.

BOOKS AND ARTICLES ABOUT B. DANIYAROV