Each year Foundation gives the winner of “THE FIRST TEACHER” contest, who took 1st place, THE  FOUNDATION AWARD – a 10 – day cultural and educational trip to Moscow, and three teachers, who took 1st, 2nd and 3rd places – a SPECIAL PRIZE of the FOUNDATION – trip of all pupils of the class of these three winners to Bishkek for the week-end. Its own teacher-the winner – and 3-4 members of the parent Committee accompany each class.

As before, the Foundation organizes children’s travel not immediately after the 2nd round of the contest, which is held in September, but in spring – in April, when it is warm and sunny. This is important in our mountainous Republic – usually children have to overcome mountain passes to come to the capital.

Below is a report on the trip, held in April 2018 according to the results of THE FIRST TEACHER 2017 contest.

As in the previous year, the tour took place in the last weekend of April from 27 to 29th. The children were looking forward to the trip, as the winner was determined, as always, during the second round of the contest, in early September. This time winning teachers were Karimova Turumkan from the village Temir of Issyk-Kul region, Akunova Nur from the village of Cholpon, Naryn region and Nurgul Karaeva from the Jany Bak village of Batken region.

Bishkek as if waiting for our charming guests! The sun shone brightly, the sky was blue, and the flowerbeds were full of bright tulips. Bishkek preparing to celebrate the 140th anniversary of the city, and our second and third grade students and “already quite adult”, fourth grade students – all 73 – walking through the city center in pairs being full of positive emotions began to sing, lifting to the beat of the right hand the song which is kind of Bishkek hymn. Below is a sample translation:

My Bishkek, my Bishkek, you are the capital,
You have completely filled my heart
Happy when I dream of you
Be always, be always my Bishkek

Passers-by smiled and took pictures of children. This attention did not embarrass our singers, they were singing, having fun!

Now I will tell you in order about how these wonderful three days passed on April 27-29, 2018. 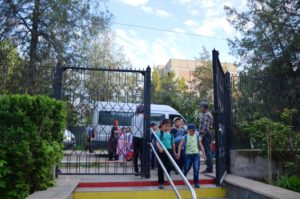 Children arrived in the capital on Friday 27 April for dinner, full of impressions from the road. From the Batken village Jany Bak they arrived by plane Osh – Bishkek. From Cholpon village, Kochkor district, Naryn region and from Temir village of Issyk-Kul region arrived by minibus.

At this moment we got a positive surprise: the children prepared a concert specifically for us in Bishkek and each other. They wanted to perform right there, before they went to bed. That they carried out, gathered in the foyer of the boarding school.   What only numbers here was not: dances, and singing, and recitation. All of those they performed smoothly, without hesitation and with pleasure. Observation: our children from rural schools are very obedient, observe the order, follow the rules established by adults.  This when they at the table, for example. But surprisingly, this willingness to follow the reasonable instructions of adults does not prevent them from being very open, active, proactive, alive. 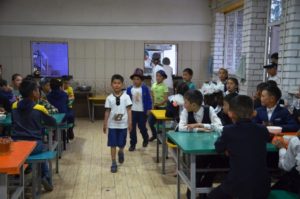 None of 73 people hesitated to participate in dances, singing, and recitation! To the contrary, they performed their roles very artistically, and showed great interest in the numbers of another class. For comparison, urban children often hesitate to perform the prepared rooms at a party, on holidays, begin to be capricious, run away and hide or remain silent. Of course, not all, but some. I must say that the concert lasted for quite a long time, not less than an hour, so we had to stop it and postpone it for the last day of our trip. In addition, we were rewarded with the wonderful surprise – it turned out to be in the form of a musical. We come back to that later.

After the concert, the children went to bed. In the morning of the next day, immediately after Breakfast, two 50-seater comfortable buses arrived for travelers, and along the road that takes about 40-50 minutes from Kant to Bishkek, volunteer guides discussed with them such topics as: how the city differs from the village, what is the capital, what is sculpture, Museum, theater, Opera and ballet, drama. Then throughout the day, when the children got on buses, our guides discussed with them interesting and informative topics or they played puzzle games, riddles. Observation 2: in this case, the children were pleasantly surprised: they know many Proverbs, riddles, logical questions; they know how to ask them, they are happy to participate in guessing.

The program began with a tour of the monument to KABA UULU KOZHOMKUL, our famous Hercules. Many children already knew and heard of him, they were genuinely interested, and with passion, they tried their hands in the trail from the hand of Kojomkul.

PUPPET THEATRE named after MUSA ZHANGAZIEV showed our children the premiere performance of “KUIRUCHUK” (Folk character). Not only were the children for the first time in a professional theater, but also members of the parent Committee, as it turned out, visited the performance for the first time. According to the feedback and reaction of the audience, they really enjoyed it! In the end, our children were taken backstage and actors allowed examining the dolls.

THE ALA-TOO SQUARE. Statue of MANAS and CHYNGYZ AITMATOV. The guides told the children about these 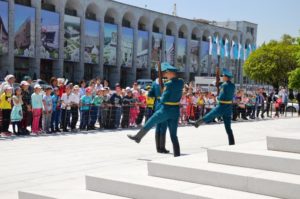 monuments and heroes. However, the main impression on the main city square, the children got from the CEREMONY OF THE NATIONAL GUARD SOLDIERS CHANGING at the flagpole. Of course, we planned our program in time so that the children were able to see this, and we have not lost! Immediately after the changing of the guard, the children began to March, lifting his feet high, trying to repeat the movements of the guards!

We all had lunch together in the cafeteria “Ugolyok” (Ember) near Ala-Too square and went to the MUSEUM OF MIKHAIL FRUNZE. It is the oldest Museum in Kyrgyzstan, opened in 1926. The Museum guides managed to arouse and maintain the interest of young visitors, well done! It was especially interesting for children to see the real house of Frunze family inside the house-Museum, Tachanka (machine gun cart), model aircraft.

From the Museum the children went to the ZERO KILOMETER near the Ala-Too cinema, which also aroused their keen interest. The children discussed how far and in what direction their home was. I must say that many of the kids were familiar with the compass.

The tour continued with a tour to Kurmanjan Datka monument, open-air Museum, Oak Park, monuments in the center of Bishkek, as well as recreation and ice cream in the city’s favorite Oak Park. By the way, every time the children had a free minute, for example, waiting for the play in front of the theater, in the Park, children played traditional outdoor games, such as Ak Terek – Kok Terek, Uchtu-uchtu and others.

The children proceeded in the direction of the OPERA AND BALLET THEATRE, past the monuments to ballet dancer Cholponbek Bazarbayev, poet Aaly Tokombaev, and Fine Arts Museum and Kasymaaly Bayalinov library. Here the children were again “picked up” by buses, and we went to dinner at the Aurora business center. 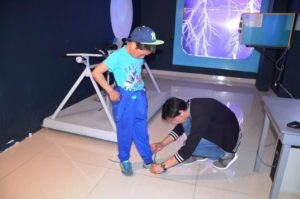 The next day, after Breakfast and check out from the BILIMKANA-KANT residential school they spent two hours in the Science Museum for children “DNA”. Here the children had an interesting tour of inspection of educational exhibits that help to understand the laws of physics and show with “magic tricks” that demonstrate the laws of chemistry. Like in the previous year, the Museum made a lasting impression on children. Museum guides leaved good impression on us by the skills in communicating  with children and presenting the educational material to the little ones.

The finale of our trip was a visit to the Aurora business center, where lunch was planned. The staff of the business 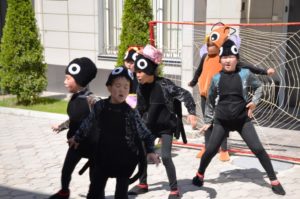 center gave us the opportunity not only to dine, but also to carry out conceived from the very beginning of our journey: Naryn children showed us the MUSICAL “ALTYN UYA”, which made a splash! All 26 students in fourth year of secondary school name Korchubek Aknazarov participated in the performance. Played, quick, easy, artistic, with pleasure, no one ever forgot the role, and all cheerful performance lasted 50 minutes! Interestingly, the teacher, Nur Akunova and her students took the trouble to bring theatrical costume of ants, butterflies, dragonflies and all the props. They performed musical outdoors, in the courtyard of the business center; the play was very light and festive. I was surprised and pleased with the children, and did have fun. 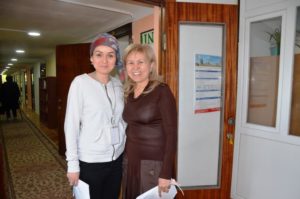 Throughout the trip with the children, there were volunteer guides who pleased me no less than were volunteer guides who pleased me! I was pleased with their ability to communicate with children, a high sense of responsibility, reliability, resourcefulness, cheerful disposition and support for each other. They worked well together as if played in the team of Olympic game! Kurmanbek Jaanbaev, an employee of  Kyrgyztelecom, Janara Duisenova, Arzygul Omorova, Nurbolot Janybek uulu, Lira Urmatova, students of KEU, – thank you all very much! You will do to take along! I thank the Department of tourism Ainur Beisheeva who attracted to volunteering her own students, as well as Kashybaeva Ainagul for your wonderful advice to contact this Department for finding volunteers.

Like last year, we got help from the leadership of BILIMKANA – TOLONDU TOICHUBAEV and ELNURA OSMONALIEVA in arranging children accommodation in Bilimkana-Kant residential school. They gave us the opportunity to accommodate children for 2 nights in a boarding school in excellent conditions – in a quiet and green area! The Director of the school Aizada Turganbaeva, employees Kunduz Duvanaeva and Toktobubu Talipova organized the distribution of the rooms and dinner for children very well. Chef Ainura prepared the food; we thank her for a tasty food! School of BILIMKANA set a precedent of serious material support to the project of our Foundation (have a look at project budget)!

This year the entrepreneur AZRET BOOTAEV organized a dinner and lunch to all children and adults in the dining room of the business center AURORA! We are pleased not only by the fact that this is an important material support, but also by the initiative of Azret, which strengthens confidence that love for children, attention to them and generosity are qualities not forgotten by our people. Mars Bootees helped to implement the initiative, and prepared children – Elvira.

Entrepreneur SVETLANA TYNYBEKOVA helped us to organize transport at an affordable price, which was not easy, because, unfortunately, in our country the tourist infrastructure is far from perfect. Svetlana also presented schools with a set of books for children and teachers.

I want to thank the founder of DNA GULNAZ TURBATOVA for the creation of a great Museum for children as well as of Kyrgyz language guides who have worked professionally with our guests.

All participants acknowledged that the tour was informative, interesting, festive! In addition, I after talking with our guests even more eager to LIVE LONG IN the world!

Please, have a look here:

Children composed this after the tour

Children sent in a year after the tour