This publication is a part of an album “The power of fragility and hatdness of art.  Women in Kyrgyz cinematography” by Gulbara Tolomushove published by International public foundation “Rosa Otunbaeva initiative” within the frames of The Embassy of Switzerland’s project “Women of a modern art – to children”, 2017. We thank the Foundation “Roza Otunbaeva Initiative” and the author Gulbara Tolomushova for permission to publish the article. 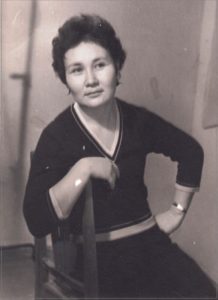 Lilya Turusbekova was born in the capital of Kyrgyzstan; her father was a prominent author Jusup Turusbekov. She graduated from Moscow All-Union State institute of cinematography (VGIK), faculty of film directors, in 1956 and started her work at the “Kyrgyzfilm” studios. She was awarded a title of an Honored worker of arts of Kyrgyz Republic.

Lilya Turusbekova has directed many documentary features including short chronicles “Soviet Kirgizia”,  full-length films “Silver water” (1956),  “They were born in Tyan-Shang” (1957), “Great epos” (1962), “In pursuit of spring” (1967), “Soviet Kyrgyzstan” (1974), “Baken Kydykeeva” (1977), “Bolsheviks of Pishpek” (1977), “Koshoi-Tash” (1982), “Destiny” (1984), “Myskal”, “Resurrected from dust” and many others. All these films are an integral part of a national cinematography treasures. In her works she depicted an image of a contemporary creator, toiler of soil, narrated the story of a cultural blossoming of Socialist Kirgizia.

The film ‘Silver water” tells a story of camaraderie and mutual aid of workers at Heidarkan mines mining the rare metal – mercury. 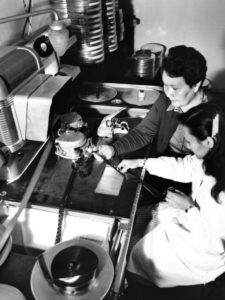 the profound shift in Kyrgyz people’s lives. It consisted of separate novellas each one of them depicting the life of one of our contemporaries. Drawing these individual portraits of a farmer K. Shopokova, a teacher O. Kyshtobaev, a ballet dancer B. Beishenalieva, a shepherd O. Jarkimbaev, a scientist A. Mamytov, composer T. Ermatov, she was able to recreate an image of a contemporary man – the creator and a master of his native land. “Their human destinies are depicted with imagination, precision and truthfulness. This film has graced many a big screen in various countries” (Ashimov K. – Kyrgyz cinema. – Bishkek. – 1999 – p.13).

Her next film “I and my friends” has won the audience with its rich expressive cinematography. An offbeat prologue whereas a boy tells about his new life in a boarding school he came to from a distant village, outlined the dynamics, warmth and lyricism of the narrative.

Lilya Turusbekova has often collaborated with a talented cameraman Kadyrjan Kadyraliev. His brilliant work helped her to put a lyrical touch to a number of episodes of the film “Your girlmates” telling the stories of two women – Jumagul Urkuchieva, a craftswoman at the sewing factory and Anara Isaeva, a  novice teacher.

The film “Masters of Kyrgyz art” is depicting the images of outstanding stage artist Muratbek Ryskulov, and 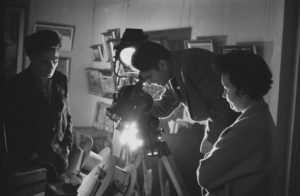 composer Abdylas Maldybaev. “Baken Kydykeeva” is dedicated to the favorite Kyrgyz actress, “Myskal” – to the renowned singer Myskal Omurkanova. Lilya Turusbekova was always drawn to strong outstanding personalities who made a large contribution to Kyrgyzstan’s cultural progress. Such as, for instance, Klavdia Antipina – the film “Destiny” tells us about everyday hardships but also about festive moments in a life of a prominent ethnographer.

The film “Bolsheviks of Pishpek” was dedicated to the history of origins of a Bolshevik’s organization in Pishpek (Bishkek) and its role in a fight for workers and peasants’ power. Lilya Turusbekova perused many rare photo documents, old newsreels in order to unfold a topic in many aspects uncontemplated before in Kyrgyz documentary films history.

Lilya Turusbekova has worked on two full-length color films “Soviet Kyrgyzstan” and “Koshoi-Tash” in a collaboration with her faithful work partners – screenwriter Leonid Dyadyuchenko and cameraman Nurtay Borbiev. (note by this site admin – Lilya Turusbekova has filmed two more full-length works – “In pursuit of spring”, 1967, and “The birth of a song”, 1961 – in a collaboration with Y. Gerstein).

“Soviet Kyrgyzstan” is dedicated to the 50th anniversary of Kyrgyz Republic celebrated in 1974.  She attempted to give a full-scale picture of achievements of working people. “The cinematography of the film is in images relatable to the audience. Shot from the high-sky point of view there opens a panoramic multi-faceted picture of mountain ridges and lakes, blossoming valleys and green pastures, modern cities and villages. There are many frames shot from a moving camera position – from the cockpit of a crane or helicopter and airplane, or a cabin of a cotton-harvester. They translate the dynamics of life of the country”.

The central figure in a “Koshoi-Tash” is Korchubek Aknazarov – the first secretary of a district committee, under whose leadership the farmers have been transforming the Kochkor valley.  Lilya Turusbekova intensely gazed into the farmers’ faces. Their task was not an easy one – to free a soil from gigantic stones and boulders. Even the name of the film originates from the name of Koshoi-batyr’s boulder.

Ashimov wrote:” We see the people who are battling for every inch of a soil to transform their valley. There are prominent stockbreeders, farmers, watermen, mechanics, village heads. Their labor results in an enhancement of the productivity of land. Moreover, we are being told that where there was an yield of six centners per hectar, it is now forty-forty two, and in some places even fifty fife. Such a success was made possible because of their selflessness in developing virgin land. The film glorifies labor and makes us to be proud of these men. Austere and emotional at the same time, it gets at us and is convincing”.

Lilya Turusbekova herself was grateful to cameraman Nurtay Borbiev. She praised him:” He was always eager to imprint the beauty of austere mountains of Kochkor”.

The screenwriter of this film Leonid Dyadyuchenko wrote in his eulogy to Lilya Turusbekova: “Even the idea of her best film “Koshoi-Tash” was formed as a motive to gaze into the inimitable look of the homeland, the looks and fates of its ordinary people. She saw an opportunity to get into a contact with a great reformative force of labor, the sole panacea from life misfortunes. She saw and showed the audience how the village people from low to high, not due to being under pressure from powers to be, not for some official show reports, but for the call of their peasant nature, are freeing no man’s land out of ancient boulders to grow an apple orchard on it. How sugatchi-waterman is intently listening to the murmur discernible only to him in the still of dawn, how joyfully the exhausted July’s soil is absorbing the water”.

L.Dyadyuchenko wrote in the same article about the last film of the director – “Resurrected from dust”- depicting tragedy of 1937: “And that is why it is so sole-piercing like an epic cry-koshok. Again, in this chronicle her determination to avoid the official protocol was predominant. She skipped the exhumation reports, the decayed body of evidence, the photos of sculls shot through, the media’s tell-alls, but directly approached the children and widows of the perished, whom she was well acquainted and shared the common yard, Dzerzhinsky boulevard, mutual destiny with. And that was also the fate of her father too, of his contemporaries, the fate of the parents of her husband and of many others.  She was privy to that not by proxy but experienced it one way or another in her own life”.

Many a colleagues note the fact that Lilya Turusbekova was exceedingly tactful and well-bred person. In a R. Shershenova’s film “The first Robin” (2014) dedicated to the film director, there are reminiscences of her colleagues – cameramen Manasbek Musaev and Valery Vilensky.

She was married to the academician, professor of medicine, M.D., physiologist Sanjarbek Daniyarov. Together they raised two wonderful daughters – twins Gyuzel and Asel and son Bektur.

Her whole life was spent in a circle of creative people, where great ambitions are brewing, where sometimes excess is attributed to the demonstration of an extraordinary personality. Nevertheless, her genuine naturalness, goodwill, nobility in words and deeds, being immanent to her nature, worked magically anywhere – either on set, or at an art council meeting. Everyone and all unwittingly raised up to a tone set by her and became more interesting and significant themselves. She always ennobled the milieu wherever she was in at the time.

There is a whole era reflected in the films created by Lilya Turusbekova, being not a product of an invention, not made up to gratify the current political trends, but seen through the eyes of an honest and intelligent documentalist. Perhaps, that is a most truthful story.

THE FULL FILMOGRAPHY IN OUR SITE

THE DOCUMENTARY ABOUT LILYA TURUSBEKOVA ON OUR SITE