Home › Home list › COUNTRY › History of my region › NEW ABOUT THE PAST › ZINAIDA RICHTER. BROCHURE OF 1930 “ASIAN SWITZERLAND (THROUGH THE KYRGYZ NOMADIC CAMPS)” 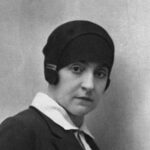 Noting the interest generated by the publication of an essay by Vasily Grossman on our website, we decided to offer our readers another work of this kind. The author of the “Life and Fate” novel describes post-war Kyrgyzstan, as for this essay, it contains sketches of the life of the republic in the last year of the New Economic Policy (NEP). A brochure from the series “Library of the proletarian tourist” entitled “Asian Switzerland (through the Kyrgyz nomadic camps)” was published in Moscow in 1930. It tells to the reader the impressions received by the author during a trip made in the summer of 1929. The traveler’s route ran from Frunze through Tokmak, Boom, Rybachye, Karakol, Karkara, Suusamyr. In general, the same as that of Vasily Grossman. The traveler used different vehicles – a car, a bus, which all passengers pushed uphill; cart, longboat, well, and horse rides. The people met by the traveler and communication with them differed. Among them was, for example, an old-timer from Karakol, 90-year-old retired general Yaroslav Korolkov.

There was also a mention in the book of the uprising of 1916, and author brought not only the names of Kanat Abukin, and the children of Shabdan Jantaev, but also the captain Zheleznyakov, as well as “anti-heroes” of Urkyun* such as police chief Porotikov and others. The memory of those events was still fresh, and the traveler, as best she could, tries to understand what happened, to retell what she understood in her own words.

There are also stories about how the Kyrgyz go to resorts, how they collect opium, how the “first since the creation of the world” movie show took place on Suusamyr and political disputes on the nomad camp. The fight against domestic syphilis, and the delimitation of pastures, and the arrest of the manap are mentioned… The traveler’s notes mix the dramas of the pre-revolutionary period and the everyday troubles of the Kyrgyz outback a dozen years after the establishment of Soviet power.

Such sketches are unlikely to be found anywhere else. And the natural beauty of the places along which the route runs through the whole narrative … And in the end, amazed by what he saw, the author exclaims: “Was there any artist-painter on Suusamyr and did he capture the sunset in its mountains?” … because nothing is more beautiful impossible to imagine.

A little about the author. Zinaida Vladimirovna Richter (born Durova) (1890-1967) – was an extremely restless person. Adventurer in the best sense of the word. She began her essay about a trip to Abkhazia (where she also visited in 1929 before traveling to Kyrgyzstan) with the words “All the southern Black Sea Caucasian cities, like fragrant viscous Turkish delight sprinkled with sugar, quickly get bored”. After that, she describes how she climbed into places where for 15 years they had not seen a single visitor … How she discovered there … blacks who, to the question “How did they get here?” answered: “You’d better ask how the Russians got here … but we have always lived here.”

She walked from Moscow to the Crimea, sailed on an icebreaker to Taimyr, climbed Elbrus, participated in the first ever flight on the route Moscow-Beijing-Tokyo. She was a correspondent, including a military correspondent for the central newspapers Izvestia and Pravda. There is information about her on Wikipedia, and we will not retell them all. We only note that when in 1952 she, like so many bright people, got the repressive machine of the already agonizing Stalinism, the Talas district of the Jambul region became the place of exile for the traveler. It might assume that the native Muscovite Zinaida Vladimirovna went there without fear: after all, she learned a lot about these places and local residents in 1929…

This material is currently presented only in Russian.
Unfortunately, the quality of the copy is not good.


THE HISTORY OF HISTORY