Home › Home list › People › THE PEOPLE AND THE ERA › REFLECTIONS ON THE TIME › BOOK 2021. TETSU AKIYAMA. THE KYRGYZ BATYR AND THE RUSSIAN EMPIRE

REFLECTIONS ON THE TIME 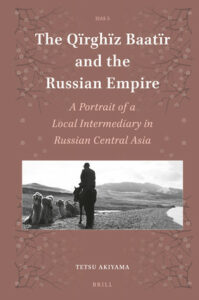 The Qїrghїz Baatïr and the Russian Empire. A Portrait of a Local Intermediary in Russian Central Asia. Series:  Islamic Area Studies, Volume: 05. – 2021. 144 pp

Link to the book on the website of the Brill publishing house: The Qїrghїz Baatïr and the Russian Empire. A Portrait of a Local Intermediary in Russian Central Asia

We would like to share the news with our site readers who are interested in history. In April 2021, Brill publishing house released the book by the Japanese historian Tetsu Akiyama “KYRGYZ BATYR AND THE RUSSIAN EMPIRE” in English, and in July 2021, it published an electronic version of the book. The international publishing house Brill was founded in 1863, its head office is located in Leiden (Holland), while there are branches in the USA, Germany, Singapore and Beijing. The publishing house specializes in books in the humanities and social sciences, international law and other selected fields of science.

The book by Tetsu Akiyama is a revised and enlarged edition of the book previously published in Japanese “HERO OF NOMADS (BAATYR) AND THE RUSSIAN EMPIRE: FROM THE LIFE OF ONE LEADER KYRGYZ”. This edition was presented by the author in Bishkek in March 2018. We reported on our website about the event at the Kyrgyz State University named after Jusup Balasagyn. Unfortunately, by that time the book existed only in Japanese, which was inaccessible to the majority of Kyrgyzstanis, so we could form an idea about the content of the book only from the words of the author and reviews. A link to a post about this event is in the end of this publication.

The work of the Japanese scientist is undoubtedly of great interest to us, first, as a view from the outside. The author investigates the biography of Shabdan Baatyr (1840-1912), the prominent Kyrgyz historical figure of the 19th – early 20th centuries, based on significant archival material. In the end of this text the link to the publication revisiting the dates of his life.

The author studied documents from various archives of the Kyrgyz Republic, the Russian Federation, the Republic of Kazakhstan, the Republic of Uzbekistan, as well as family archive of Janyl Abdyldabek kyzy, the great-granddaughter of Shabdan Baatyr.

The new English version of the book is currently available for purchasing on the publisher’s website, both in electronic and printed versions. The link is provided above.

We do not have the rights to publish this monograph here on the site. So far, we have applied for permission to translate the book into Kyrgyz and Russian. At the same time, interested readers can view selected excerpts from the book on the website of the Brill publishing house, and familiarize themselves with the full bibliography of this work.

From the publishing house flyer:

In “The Kyrgyz Baatyr and the Russian Empire” Tetsu Akiyama gives a vivid description of the dynamism and dilemmas of empire-building in nomadic Central Asia from the midnineteenth to the early twentieth century, through reconstructing the biography of Shabdan Jantay uulu (ca. 1839-1912), a chieftain from the northern Kyrgyz (Kirghiz, Kyrgyz) tribes. Based on the comprehensive study of primary sources stored in the archives of Central Asian countries and Russia, Akiyama explores Shabdan’s intermediary role in the Russian Empire’s military advance and rule in southern Semirechye and its surrounding regions. Beyond the commonly held stereotype as a faithful collaborator to Russia, he appears here as a flexible and tough leader who strategically faced and dealt with Russian dominance.

All interested in the modern history of Central Asia/Eurasia and the Russian Empire, and anyone concerned with the history of modern empires in view of local actors including nomads


REFLECTIONS ON THE TIME