Home › Home list › People › Kyrgyzstan personalities. Sanjarbek Daniyarov › ABOUT SANJARBEK DANIYAROV › MUSEUM CORNER OF S. B. DANIYAROV IN THE LIBRARY OF THE INSTITUTE OF ADVANCED TRAINING OF DOCTORS, BEARING HIS NAME 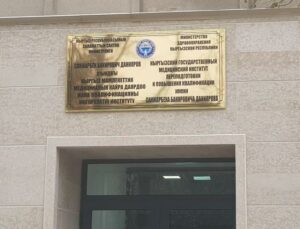 Doctors from different regions come on regular basis to the Kyrgyz State Medical Institute of postgraduate training and advanced training (KSMIPT&AP) named after Sanjarbek Bakirovich Daniyarov to improve their professional level. The name of S.B. Daniyarov, the academician, the scientist and the teacher, was given to the Institute in the past 2018, in the year of his 90th anniversary.

Following this name change Institute opened a Museum corner dedicated to S. B. Daniyarov in the library working for employees and trainees. Our Foundation has prepared materials for this Museum and designed it. It was not easy to present succinctly and informatively in the limited space of the library all aspects of Sanjarbek Daniyarov’s activity, because he did a lot as a scientist physiologist and the initiator of the radiobiological direction of research in the high altitude region, as a friend and mentor of young scientists, and as a teacher, who for many years successfully led the training of doctors for all regions of our Republic. The idea was to reflect in the exhibited materials the personality of a man who greatly honored his teachers and who was and is honored, was and is loved by his students and followers, a highly educated, charming, even charismatic and deeply decent, honest, principled.

On the library wall, we placed stands dedicated to such topics: 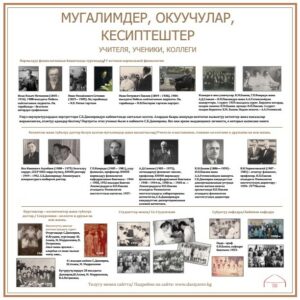 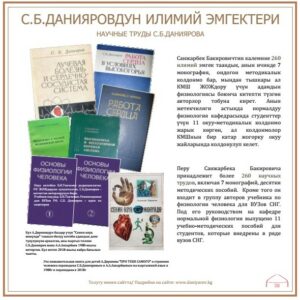 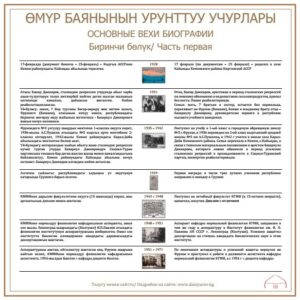 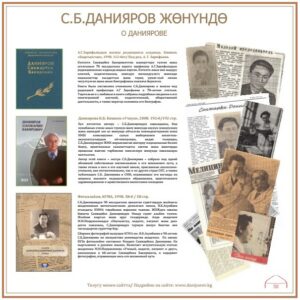 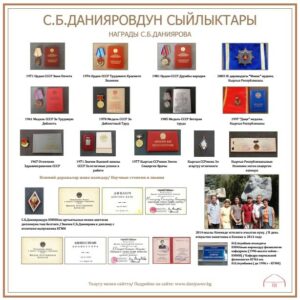 On the opposite side we placed 23 photos reflecting the activities and to some extent the personal life of S. B. Daniyarov.

I must say that the family archive has in digitized form more than 800 of his photos, almost as many of his wife-Director of Kirgizfilm Studio Lilya Turusbekova, and many others – children, relatives, friends… There are also documents dating back to the 30s of the last century, lecture notes, speeches, records of reading articles, books and more.

We forwarded to the library Museum the books about S. B. Daniyarov, books authored by him, presentations made about him by his students and colleagues. We plan to replenish and update the Museum.

CATEGORY: “BOOKS AND ARTICLES ABOUT DANIYAROV”


BOOKS AND ARTICLES ABOUT S. DANIYAROV