ABOUT THE DAYS OF SCIENCE OF KSMA AND WINNERS

ARSTANBEKOVA MIRA became the seventh winner of the Award of our Foundation, given to a young scientist–physician and the fourteenth recipient of the Award in the full list of Laureates. Our Prize is awarded annually to one young scientist winning the contest in THE DAYS OF SCIENCE OF KSMA and to one winner of the contest of primary school teachers of rural schools of Kyrgyzstan called THE FIRST TEACHER. Now, being a Laureate, Mira will go on a 10-day cultural and educational trip to Moscow in June 2018. As always, we will present a detailed photo report about this trip on our site.

Mira Arstanbekova is an assistant lecturer of hospital therapy Department of occupational medicine with course of Hematology KSMA in the name of I. K. Akhunbaev. The Scientific supervisor – S.M. Mamatov, MD

Mira became a Laureate of the Foundation Award as she won the first place at the competition of young scientists in the framework of DAYS OF SCIENCE of the Kyrgyz State Medical Academy (KSMA) in 2018, which took place from 10 to 13 April 2018. This event is held annually being a major event in the life of medical Universities of the Republic and the entire professional medical community of the country. It is intended to stimulate the development of medical science in Kyrgyzstan and the quality of teaching medicine. The DAYS OF SCIENCE help to discover the future elite of scientific specialists and practicing physicians of the country.

By tradition, every year KSMA holds the DAYS OF SCIENCE in April and dedicates it to a significant person or event. For example, in 2012 the days of SCIENCE were devoted to the memory of Sanjarbek Bakirovich Daniyarov. In 2014 – to the 75th anniversary of the University, in 2015, to the 70th anniversary of victory in Great Patriotic war, in 2016 – to the 125th anniversary since the birth of the first rector of KSMA B.Y. Elbert, and last year – to the 90th anniversary of academician M.M. Mirrakhimov.

This year’s SCIENCE DAYS 2018 was dedicated to the 100th anniversary of Kakish Ryskulova, the first female surgeon in our country, academician of National Academy of Sciences, the honored specialist  in public education, honored doctor of the KR and the honored worker of science, doctor of Medical Sciences, Professor. Kakish Ryskulovna – a living history of our medicine and an example of service to the health care and medical education. During the formal part of the event, many speakers noted the constant strive of the academician to pass on her surgeon skills to the disciples and to generously share experience and to create the conditions at the Department for training of young personnel.

In General, I was pleased with the interested participation of young scientists and students in the conference, 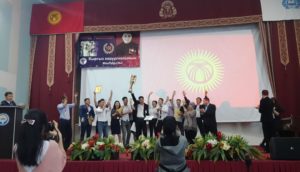 enthusiasm, informal attitude to work on the part of students, postgraduates and teachers. I would also like to note the high level of organization of the event, in which we see a lot of merit of the rector of KSMA – Professor Indira Kudaibergenova.

The organizers also arranged the student Olympiad within the DAYS OF SCIENCE, which got a very high esteem on the part of speakers.

Photo reports of the previous cultural and educational trips of the winners of the contest of young scientists within the Award of Sanjarbek Daniyarov Foundation:

ABOUT THE PROJECT “YOUNG MEDICAL SCIENTIST”


ABOUT THE DAYS OF SCIENCE OF KSMA AND WINNERS