The author of the article – Leonid Borisovich Dyadyuchenko (1934-2005), writer, poet, journalist, translator, screenwriter and documentary filmmaker: “engineer-geologist by education, encyclopedia of knowledge, educator by vocation, he was a hot patriot of Kyrgyzstan and devoting to the country his “soul beautiful impulses” materialized in many documentary works of art-essays, novels, films. His favorite genre is a documentary story, understood as a narrative about the wonderful people of the past and the present (“Family silver”, “Kyrgyz motif”, “Silver globe”, “What is it, Victory?”etc.)” – G. N. Klymenko. About the author – read more   (in Russian)

Leonid Borisovich knew very well Lilya Turusbekova for many years due to his work at the Studio “Kyrgyzfilm” and being the editor of some of her films, and, most importantly, the author of the script of her films “Soviet Kyrgyzstan” (1974), “Koshoy-Tash” (1981). 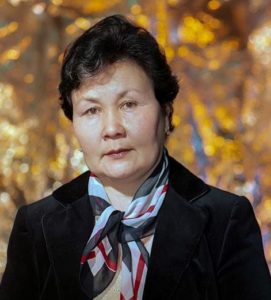 When still a young woman Lilya stood out amongst her peers and colleagues with her natural non-exaggerated earnestness. In a cinematic environment, being simplistical on the surface, nevertheless she never allowed either in relation to herself or moreover to the others even the slightest display  of haughtiness or fraternization, arrogance or servility, inaccuracy in words or deeds.  Amongst the “artists” it is common  to treat family issues and the duties related to them with slight. In a contrast to that, display of lack of moral awareness Lilya was fundamentally true person. And when Sanjarbek Daniyarov – the winner of State prize in science and medicine, M.D., the author of many scientific publications, monographs, textbooks on medicine, professor of medicine, under whose guidance 16 000 doctors have been graduated, was able to do all that, it was fulfilled not in the least due to the fact that Lilya Turusbekova – his true life partner – stood by his side.  She managed somehow not only  to fulfill not the easiest mission to be a film director but at the same time to be a wife, a mother, a granny, a host to a hospitable home open to friends and relatives, and a technical secretary to the academician and public figure. 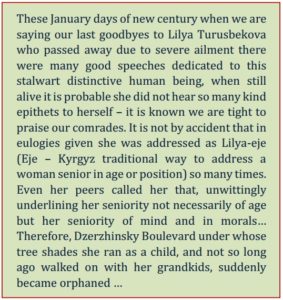 Growing up in an environment of Kyrgyz intelligentsia of the first generation in a family of a father–poet, at the time when her country was fighting the right cause in WW2 and winning the war, she carried the reflection of the light of this supreme justice through her whole life, staying true to the name of her father who perished in a battlefield of Moscow, and staying true to her  beloved profession. But she never talked about it, did not try ”to be in the right place on the right time”, that being commonly  praised of the people “taking the initiative”. In an artistic circles the wars of ambitions, cliques forming in the process or on set, dividing people to the warring camps, are a common place oftener than not. There were “Wars of White and Red Roses” in a world of cinematography as well. Some played Kurosavas, some – Bondarchuks, some imagined themselves a spiritual leaders or the saviors of the nation, some turned in a frustration to become a hippie.

Lilya was always her own person. She was seemingly led by Boris Pasternak’s maxim – “To be famous is not pretty”. Or by the verses of the not the least great poet Yunna Moritz : “I have not drunk vodka with geniuses and have not let them in the proximity”.

Mikhail Prishvin in his diaries noted:”My downfall is in that that I begin to see more and more bad things in our life”. Those deep thoughts are the proof of the opposite and can explain a lot of Lilya’s standing in her life and her creative work. As a partial individual, she evidently saw the negativity of our reality, but she intuitively avoided to transfer it unto the big screen, in order not to multiply and replicate that negativity. She was drawn in the first place to the positive roots, as if such a selectivity could enhance only the good things, the soul warming and hope- giving.

Nowadays such a standing may seem vulnerable and hopelessly obsolete. But exactly nowadays

when so called “free press” pursuing the sensational, has become a sink pit  of all criminal and foul, when TV out of habit still carrying a name of state  or even national TV,  sagged under the flood of ads of cigarettes, hygienic  products and the way of life in general brewed on brutality, bordellos and dead bodies,  the work of  true artists and patriots gone and fading away now,  are not only the breath of fresh air from mountain heights, not only the reason for nostalgia,  but the more and more urgent call for a moment to reflect upon who we still are,  and what are we at risk  to become  of. Moreover, do not console yourselves with words of a poet classic “we could not predict what our words would recall”.  What has to predict? It is recalled with grim reality on our every step, on all our street crossroads.

The pop culture licentiousness on stage or in politics, in art or economics, leads to destruction of human values, of all of that that makes a human being a human, and becomes a criminal violation of human life, denying the possibility of a decent future.

There used to be a term – reliable comrade. It is no secret how unreliable there were and still are many of those who have not hesitated for a moment to switch the masks of reliable comrades into the role of reliable sirs and quickly have invented the striking definition incommoded to use indefinitely – “limited liability”.

Lilya was always above all a reliable person. In every word. In every deed. It is not by accident that she was chosen to helm such high profile films like “Soviet Kyrgyzstan”, “It is your day, republic”. These films supposedly were to chronicle the memorable dates or the anniversaries of the state. However, she outlined the stylistics of the films in her first prominent works of 50s and 60s – “They were born in Tyan Shang” and “In pursuit of the spring”. Even the idea of her best film “Koshoi-Tash” was formed not like an expanded cinematic info on working people’s success of such and such district, but a motive to gaze into the inimitable look of the homeland, the looks and fates of its ordinary people. She saw an opportunity to get into a contact with a great reformative force of labor, the sole panacea from life misfortunes.

In addition, she did not miss this very important opportunity. She saw and showed the audience how the village people from low to high, not due to being under pressure from powers to be, not for some official show reports, but for the call of their peasant nature, are freeing no man’s land out of ancient boulders to grow an apple orchard on it. How sugatchi-waterman is intently listening to the murmur discernible only to him in the still of dawn, how joyfully the exhausted july’s soil is absorbing the water.

It is understood that this kind of films were not the prize winning material in elite cinematic bashes abroad, where cultivated existentialism as a choice of taste was ruling. That is why Lilya’s films were not chosen to participate in international film festivals. Nevertheless, she was seemingly not frustrated by the fact.  Moreover, she was never flattered by lame media’s complimentary clichés such as ‘the first Kyrgyz woman to be a documentary film director”.  ‘Tis true to the words of the same Yunna Moritz :”Live your life upon that only you would tell, not upon that you have been told”.

That is why so sole piercing like an epic cry-koshok is Lilya Turusbekova’s last work – the film depicting the tragedy of 1937 – “Chon-Tash, resurrected from dust”. Again, in this chronicle her determination to avoid the official protocol was predominant. She skipped the exhumation reports, the decayed body of evidence, the photos of sculls shot through, the media’s tell-alls, but directly approached the children and widows of the perished, whom she was well acquainted and shared the common yard, Dzerzhinsky boulevard, and mutual destiny with. In addition, that was the fate of her father too, of his contemporaries, the fate of the parents of her husband and of many others.  She was privy to that not by proxy but experienced it one way or another in her own life.

“…Live your life upon that only you would tell”

More on the topic: