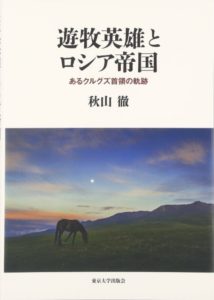 “HERO OF NOMADS (BAATYR) AND THE RUSSIAN EMPIRE: THE LIFE OF ONE LEADER OF KYRGYZ PEOPLE” – the title of 243-page monograph by Japanese researcher Tetsu Akiyama released by the publishing house “University of Tokyo Press”.

The author of the book used one of the modern methods of historical research, which is called microhistory, namely through the prism of personality and life of Shabdan-Baatyr, reflected in the documents, presented an analysis of the relationship of the Kyrgyz with the Russian Empire during its struggle for colonies and zones of influence, the structure of governance of the territory in the period from mid-XIX to early XX centuries, occurred in this regard, social transformations the Kyrgyz nation passed through at this time.

Is not it extremely interesting?

Nevertheless, the author himself presented the book to Kyrgyz historians, visiting Kyrgyzstan. This was done at two events:

The rector – Kanat J. Sadykov – brilliantly moderated the seminar whereby listeners were able to extract the maximum possible information about yet unpublished book. During the discussion, many questions were asked, the book certainly aroused great interest, and now historians and those interested in the history of Kyrgyzstan and the Russian Empire, as well as the personality of Shabdan-Baatyr are waiting for its appearance in an accessible language.

Ablabek A. Asankanov, the Director of the Institute of history and Cultural Heritage of NAS of KR, was moderating the round table. The opening speech was made by Kanybek K. Imanaliev, the Member of the Jogorku Kenesh (Parliament), Kazuya Harada, Deputy Ambassador of Japan in KR, Advisor, and Osmon A. Toguzakov, Vice-President of National Academy of Sciences, member-correspondent. This time the range of topics in the discussion was broader and included the events of 1916. In this regard, Vladimir Schwartz made a brief report on the work on the database of documents and publications on this topic. The communication was welcomed with great interest, although the audience had different views on the subject.

We were able to get acquainted with the translation of the contents of the book, annotation, and listen to the presentation and take part in the discussion. After that, we have the impression that Japanese scientist have deeply delved into the subject under study and analyzed it not superficially. We look forward to the translation and the next visit of Tetsu Akiyama. We will inform our site visitors about further news.

THE HISTORY OF HISTORY


NEW ABOUT THE PAST